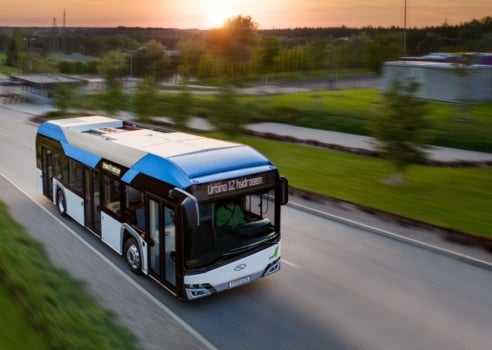 Introduced in 2019, the Solaris Urbino 12 hydrogen bus is capable of travelling 350 kilometres on a single hydrogen refuelling.

The bus incorporates an axle with two electric motors and is equipped with a climate control system utilising heat generated by the fuel cell module.

Ballard has received a purchase order from Solaris Bus & Coach for 25 of its new 70 kilowatt heavy-duty FCmoveTM-HD fuel cell modules, which it said it expects to ship in 2020, extending into 2021 to match the timing for the bus builds and deployments.

“These German cities have previously ordered 45 fuel cell buses powered by Ballard. The combined fleet will be the largest fuel cell bus fleet yet in Europe highlighting the benefits of simple refuelling, long range and zero emission operation.”