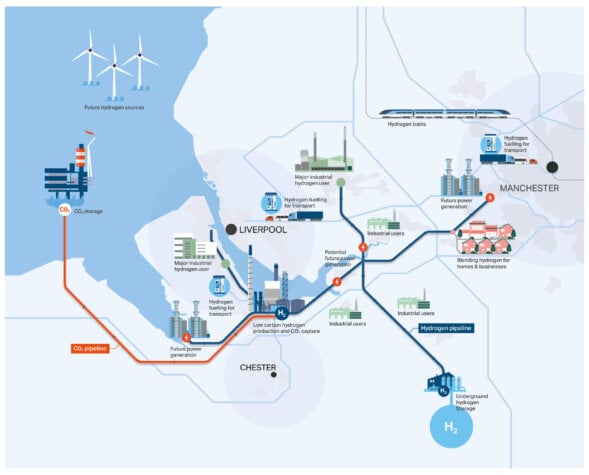 £72m secured to transform the North West into a low carbon industrial cluster; hydrogen to play a key role

One of the UK’s most advanced hydrogen and carbon capture, usage and storage (CCUS) projects has secured £72m to transform the North West into a low carbon industrial cluster.

HyNet North West today (17th March) shared news of the funding that will help accelerate a final investment decision in 2023 for the initial phase and become operational in 2025.

Funds of £33m were received from UK Research and Innovation (UKRI) through the Industrial Decarbonisation Challenge fund, and £39m was from consortium partner contributions.

An essential part in the UK Government’s 10-point-plan for a green industrial revolution, the project will help transition the UK to net zero greenhouse gas emissions by 2050.

“HyNet North West is an exciting project of strategic importance to both the region and the UK.  It offers a once-in-a-generation opportunity to create real change in energy production and consumption, establishing a cleaner world for future generations.”

“It will unlock the low carbon hydrogen economy in North West England and North Wales, not only reducing emissions but also creating and safeguarding jobs.”

The area of focus for the project is the North West industrial cluster which stretches from Flintshire and Wrexham, through Cheshire, Liverpool City Region and Greater Manchester into Lancashire.

HyNet North West hopes to decarbonise such industries with hydrogen and carbon capture and storage (CCS), which is being developed by a consortium of regionally located partners, including Progressive Energy, Cadent, CF Fertilisers, Eni UK, Essar, Hanson and the University of Chester.

A new pipeline network will transport the clean hydrogen to power industry, fuel buses, trains and heavy goods vehicles, to generate electricity, and to heat homes across North West England and North Wales.

It is hoped such efforts will reduce regional carbon dioxide emissions by up to 10 million tonnes every year by 2030 – the equivalent of taking four million cars off the road.

By then, HyNet North West alone will already be delivering 80% of the Government’s new UK-wide target of 5GW of low carbon hydrogen for power, transport, industry and homes.

Commenting on the plans, Steve Fraser, CEO of Cadent, said, “When we first unveiled the plan for HyNet North West just three-and-a-half years ago, we knew quickly we were onto something big.”

“This is a once-in-a-generation moment to effect real change.  Replacing fossil gas with hydrogen will achieve incredible carbon savings, create thousands of jobs and position the North West as a world-leader in this technology.”

“Cadent and the whole HyNet consortium is determined to make that happen.”

“While reaching our climate targets will require extensive change across our economy, we must do so in a way that protects jobs, creates new industries and attracts inward investment – without pushing emissions and business abroad.”

UK MP calls on government to back hydrogen project ‘HyNet’