A living hydrogen lab: How Hyve 1 is aiming to create a mini ecosystem for hydrogen innovation and application

Plans for a green hydrogen production facility in the Southwestern US, which would also include advanced transportation test tracks, a hydrogen research Institute, a clean fuel airport, marina access and a green housing development, have been unveiled to H2 View.

Hyve 1 is perhaps one of the most significant projects in the US, as the country’s hydrogen market continues to grow and expand with innovative new technologies paving the way forward to a decarbonised nation.

It has all the factors to create a unique mini ecosystem to both test hydrogen’s use and export it across the US.

In terms of the project’s geographical positioning in the US, on the California Arizona border, there is major potential for it to become an influential area for hydrogen exportation.

“Our focus is on developing a clean energy option for transportation and sustainable living and we have a site that allows us to make a big impact in decarbonising the 24×7 US transportation operations and commerce system,” said Christopher Barker, a Managing Partner of Hyve 1.

“We sit between four major metro markets: Phoenix, Las Vegas, Los Angeles and San Diego which allows us to provide green hydrogen fuel to some of the largest and fastest growing parts of the US – plus seaports for international green hydrogen fuel export.”

“Hyve 1 sits at the intersection of two major interstate freeway systems – the I-40 traveling east and west across the US and the new I-11 which runs from the Arizona/Mexico border all the way to Canada – allowing for green hydrogen fuel transport and distribution across the US.”

“A transcontinental railroad line runs directly adjacent to  our project site and connects to two of the biggest commerce hubs in the US – Chicago and the Port of Los Angeles/Port of Long Beach – offering another potential option for green hydrogen fuel transport and distribution for use in Arizona, California and neighbouring states.” 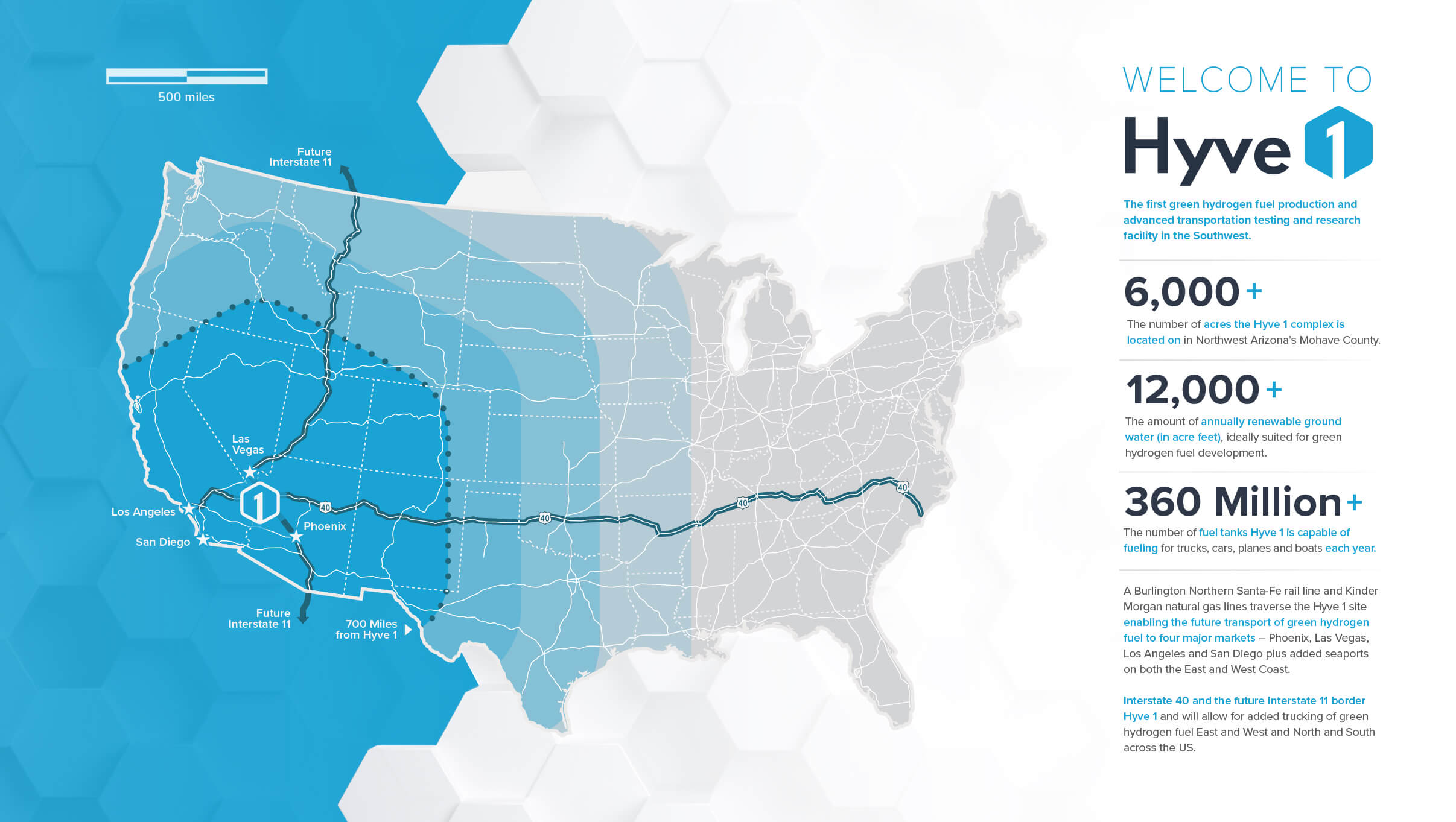 With this transport network coupled with the significant hydrogen production potential of the Project, Barker says in time this will lead to four million kilograms a day in production for supporting the Southwest and the broader US.

Although mainly focused in the US, Barker also states that the hydrogen could  be transported to neighbouring nations such as Canada and Mexico.

“For the most part, it’s been centered around US offtake and usage but depending on the organisation and a lot of the groups that we’re talking to, there have been questions about being able to produce and transport hydrogen  outside the US, particularly looking at the volume that we’re considered to be able to produce,” Barker told H2 View.

“We’re open to all scenarios and just trying to, first and foremost, see how we can provide the support to the US market as it grows and matures. But we recognise that international markets could be another aspect of our offtake as well.”

While  green hydrogen production is a key focus area for  Hyve 1 the project is also designed to facilitate research and testing of new clean energy technologies and further develop skilled workers for the hydrogen economy.

Barker told H2 View, “We’re looking to build out an academic research centre. A big focus is around research and how we train the next generation workforce in clean energy technologies and new advancements in transportation and mobility that will be utilising hydrogen and electrification.

“Our goal is to  develop a centre of excellence from academic research where we could bring existing workforce and new members of the workforce to come and train to learn and then be able to put them to work in the Project or other areas of the clean energy, transportation sustainable living market.” Barker explains to H2 View, “We’re also planning for a   surface transportation test track that would allow for different types of vehicle testing, whether it be cars, trucks, or other transit type vehicles that would be utilising some mix of battery or fuel cell technology.”

“Having the test track near   the research centre is really important because it gives you that real application testing environment. In addition, our project site is also adjacent to the Colorado River with marina access for hydrogen boat testing and operations.”

“Hyve 1 also includes space for an airfield/airport. So just like we’re looking to address hydrogen for surface transportation, we’re also looking at working with the aviation industry. Our planned airfield/airport will allow for hydrogen fuel testing and operations on fixed-wing aircraft, helicopters and drone operations.”

With the initial plans set out for the Hyve 1 project, it is clear that this  initiative  is at the forefront of hydrogen developments in the US. On top of its production capabilities, the project provides a hub to explore and test almost all hydrogen mobility solutions across air, ground and water and thus could be crucial to the growing hydrogen community.

Adding to the impressive number of specialised areas within the project, Hyve 1 also plans to include a residential area  zoned for thousands of single family or multi-tenant homes- focused on a sustainable green building design.”

“We want to ensure we have a sustainable  community with residential housing and commercial property that supports people who want to live and work in the area.” 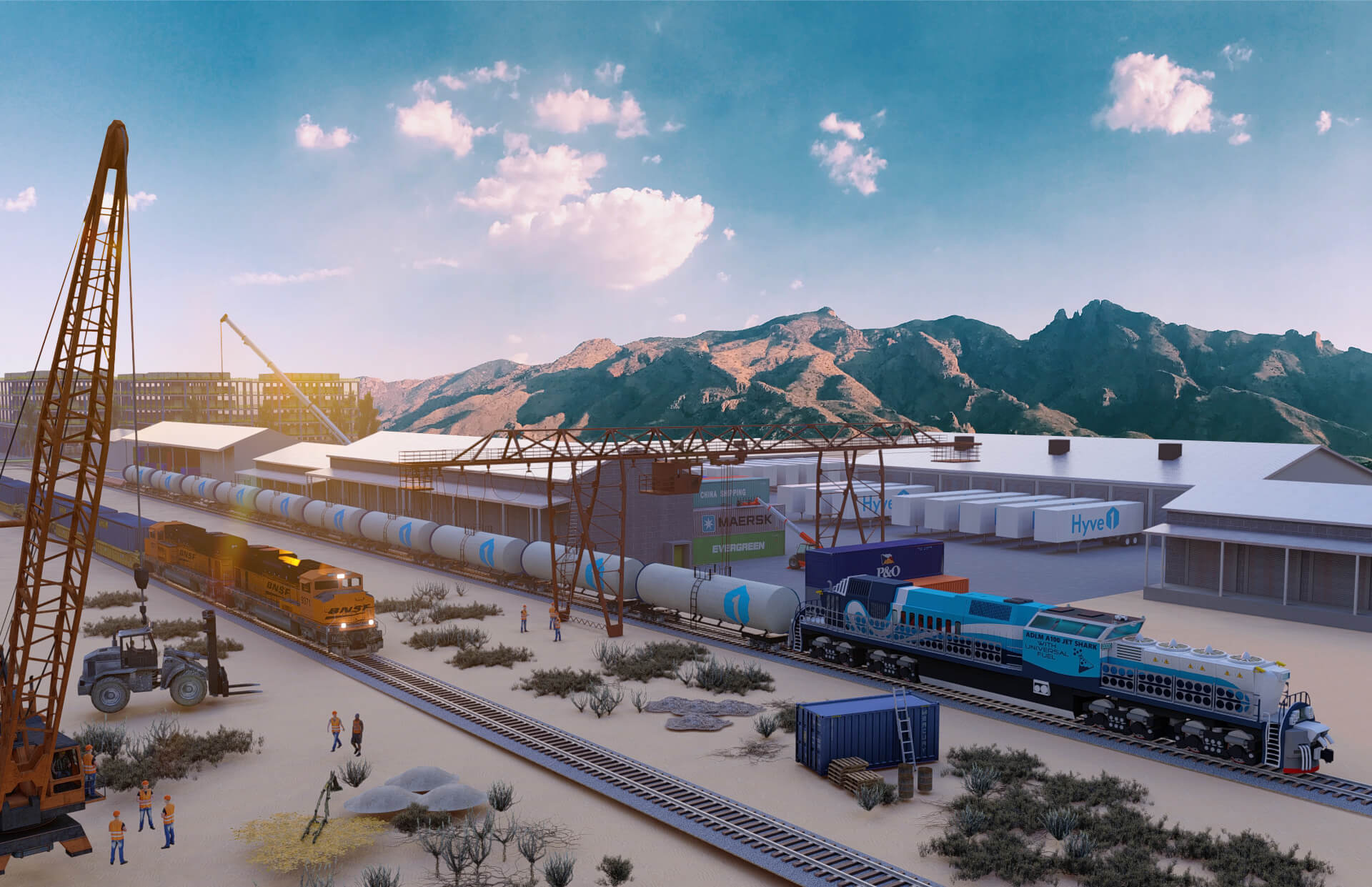 “We’re being approached by a number of organisations that are rethinking current residential housing methods and that want to implement more green building design and materials, not just in the construction but also in the ongoing power and operations.”

“A lot of what we’re trying to do is recycling the water, look at solar and/or possibly hydrogen as a power source for the homes.”

In achieving this, the project then becomes somewhat of a “living lab” explains Barker. This provides a basis to identify innovative projects and creations and then put it into practice in the surrounding facilities.

Speaking on this, Barker said, “We’re bringing different organisations into the project from an academic, development and an investment point of view. Our goal has been to provide a big enough landscape of opportunity that allows for the advancement of clean energy across transportation, education, new job training/development and sustainable living.”

“It really becomes a bit of a living lab to demonstrate what’s possible and then see the elements of the Hyve 1 project  redeployed in other locations.”

This March, H2 View will explore A Climate for Action and Investment in Europe in an immersive event that features some of the leading stakeholders and influencers in hydrogen, as well as a return to in-person networking and the opportunity to meet the Women in Hydrogen driving the agenda forward.