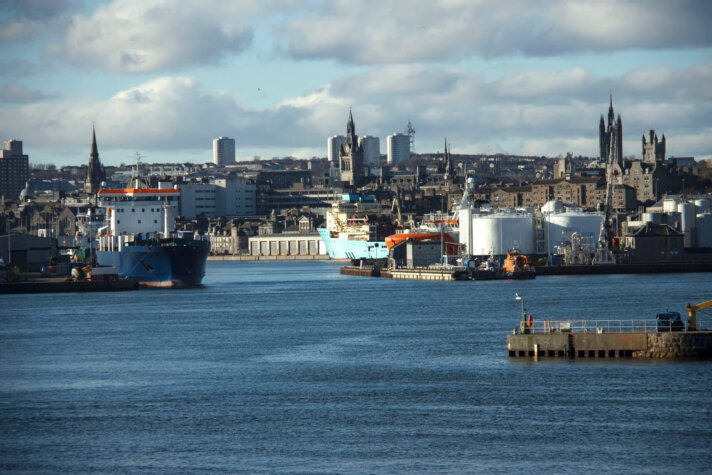 Aberdeen Harbour to explore hydrogen use with bp

Aberdeen Harbour will introduce a range of zero-emission technologies, hydrogen included, to decarbonise the port’s operations with a new deal signed with bp revealed today (Nov 17).

One of the key aspects of the agreement, formalised with the signing of a memorandum of understanding (MoU), is to explore the use of hydrogen as a clean maritime fuel.

It could also mean that hydrogen is explored to power various port operations to enhance the decarbonisation efforts in not just the port but the wider area as well.

For bp, this deal represents another in a series of developments that the energy giant is making to establish Aberdeen as a key zero-emission region whilst additionally using hydrogen as a key means in achieving this target.

bp had been recently announced as the preferred bidder to form a new hydrogen hub joint venture with Aberdeen City Council following a competitive procurement process.

Bob Sanguinetti, Chief Executive of Aberdeen Harbour Board, said, “This collaboration with bp comes at a significant time for Aberdeen Harbour, and combined with our multi-million-pound investments into our infrastructure and established three-stranded Green Port strategy, propels us into being Scotland’s leading port for energy transition.

“Reducing emissions from vessels berthed in the port and providing low carbon power supplies will be critical to achieving a green maritime industry and requires innovative thinking and practices.

“We look forward to working with bp and our stakeholders to further realise net zero ambitions, combine our expertise and ultimately bring prosperity to the north-east of Scotland and the wider maritime and energy industry.”

Emeka Emembolu, Senior Vice-President of bp North Sea, said, “For nearly 30 years, Aberdeen Harbour has provided bp with world-class facilities in support of our North Sea oil and gas operations. We are delighted to be strengthening that relationship in a way that we believe will help further the net zero ambitions of both organisations.

“We will be bringing bp’s core skills in solving complex energy problems to a progressive and highly capable port that is uniquely positioned to play an integral part in Scotland’s energy transition.”