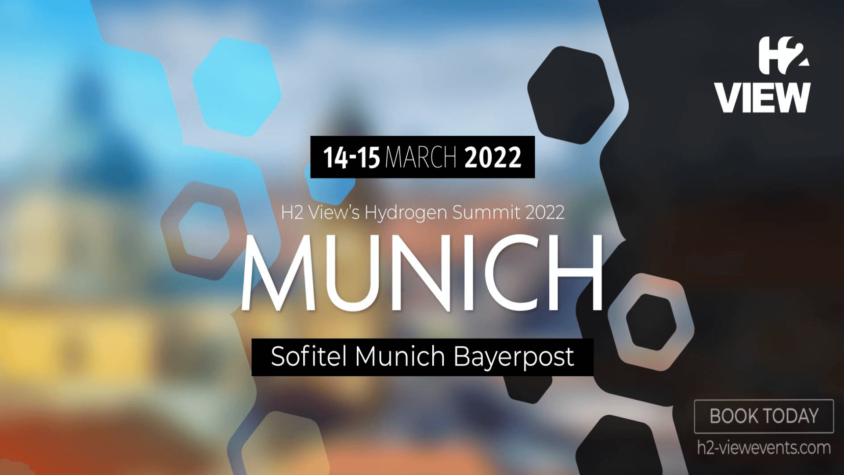 In exactly four months’ time H2 View will stage its first-ever in-person Hydrogen Summit in Munich, Germany. Set for March 14-15 at the Sofitel Munich Bayerpost, we’ll be exploring A Climate for Action and Investment in Europe, and we’ve already got some great speakers confirmed.

Hydrogen has seen unprecedented momentum in the past 12-18 months, with the clean energy carrier now the buzz word on everyone’s lips.

Hydrogen is firmly at the top of government programmes around the world, creating political backing never seen before. The technology is ready, there’s more than 350 large-scale projects in the pipeline, globally, and new entrants continue to emerge in the market.

As we move towards scale, now is the time to double down on the action and investment required – widely seen as the last piece of the puzzle for the hydrogen economy.

But what does that entail? Where are the opportunities and conversely, where are the challenges? What does the policy and investment framework look like in Europe, the region widely acknowledged as blazing the trail in hydrogen?

This is exactly what H2 View will explore in an immersive event that features some of the leading stakeholders and influencers in hydrogen, as well as a return to in-person networking and the opportunity to meet the women in hydrogen driving the agenda forward.

The event will officially start with a Welcome Reception on Monday March 14 from 6pm, giving attendees the first chance to network with each other and the first look at the 20 companies in our exhibition programme.

Who can you expect to hear from?

The conference programme for H2 View’s Hydrogen Summit 2022 will begin on Tuesday March 15 with a keynote address at 9am.

Across three plenary sessions focusing on Policy (session one), Investment (session two) and Action (session three), speakers we have confirmed so far are:

The event will also feature two special panel sessions in the exhibition area, the first of which will be hosted by the Women in Green Hydrogen (WiGH) network. H2 View teamed up with WiGH in March to bring our readers a monthly series of exclusive interviews called ‘Women in Hydrogen’, and we’re excited to bring this to the stage next year.

We’ll be announcing more speakers and our second panel session very soon, keep an eye out for updates.

For more information on the event and to book your ticket, click here.