When the 2022 Dakar Rally kicked off on Saturday (Jan 1), it did so with its first ever hydrogen racing truck.

Sponsored by oil company Saudi Aramco, the H2 Racing Truck®, supplied by French engineering company Gaussin, hopes to transform the future of racing vehicles as the pressure for decarbonisation continues to escalate.

Already taking on these pressures, Dakar Rally has said that from 2026 onwards, all elite competitors in the car and truck categories will run vehicles that meet the ultra-low emission standard.

By utilising this newly developed truck at the 2022 Dakar Rally, Gaussin will collect vital data and information to optimise the truck and further develop the company’s range of road trucks that are additionally set to launch in 2022.

The racing truck feature 380kW of fuel cells with a capacity of 80kg of hydrogen able to be stored in the truck.

A speed limit of 140km/h is also in compliance with regulations as well as a 250km range when under race conditions whilst also being capable of being refuelled in 20 minutes.

On this, Christophe Gaussin, CEO of Gaussin, said, “The Dakar is the world’s biggest rally-raid and represents an incredible showcase for Gaussin’s know-how and technology. We share with the organisers of the competition – and with the Saudi Arabian authorities – the objective of decarbonised mobility and the desire to fight with determination against climate change.” 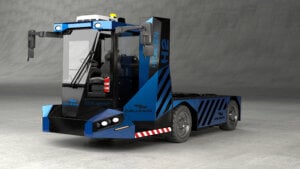 “The transportation sector is a top contributor to environmental pollution, so it’s our obligation to reduce this carbon footprint as quickly as possible, and as the cleanest energy source, hydrogen is the best way to make a significant positive impact.”

Those were the words of Christophe Gaussin, CEO and Chairman of Gaussin, a French engineering company that specialises in smart, zero-emission transport solutions. A dominant innovator in the hydrogen transportation space, Gaussin has this year alone launched multiple hydrogen mobility solutions, but its journey in the space is just getting started.

Speaking to H2 View in a recent exclusive interview, Gaussin said, “I joined the company and assumed the role of CEO in 1995 and the first major innovation of my tenure was to launch a range of tailor-made electric, self-propelled vehicles for specific industries, such as oil and gas, aerospace and others.