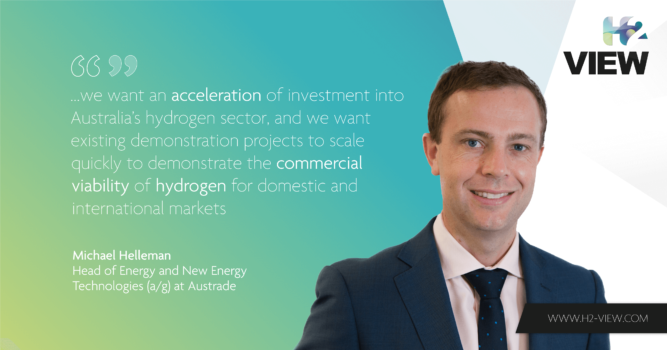 To support a future where all our energy comes from clean sources, the world needs clean, flexible, storable and safe fuels. Hydrogen has all of these characteristics. When used as a fuel, it produces no carbon emissions, only water. It can be safely used in a broad range of applications.

Australia is well placed to make hydrogen its next big export. It has all the natural resources needed to produce it, a track record in building large-scale energy industries and a reputation as a proven partner in Asia’s biggest energy importers.

An Australian hydrogen industry could generate thousands of jobs, many of them in regional areas, and it could add billions of dollars to GDP over coming decades. Managed well, it could help Australia to reliably integrate extensive renewable generation into the electricity grid.

By using hydrogen, Australia can reduce its dependence on imported fuels, and it can reduce carbon emissions in the country and around the world.

This is the vision for Australia as laid out in its National Hydrogen Strategy, released in November 2019. The strategy aims to lay the foundation for Australia to capture the hydrogen opportunity and become a leading player in a growing global market.

Given the considerable potential of hydrogen to generate jobs and growth in regional Australia, the Australian Government’s trade, investment and education promotion agency Austrade has prioritised support for activities seeking to attract productive foreign direct investment and bring new technology into the sector.

“In Australia this means working with international investors with our domestic firms, industry associations and all levels of government to accelerate the growth of the hydrogen industry,” Michael Helleman, Head of Energy and New Energy Technologies (a/g) at Austrade, explained to H2 View.

“Austrade helps international investors and companies from around the world identify and take up investment opportunities in Australia. We also help international buyers and Australian project developers by providing market insights and assistance in identifying partnership opportunities.”

Australia wants to create a hydrogen industry, as outlined in its National Hydrogen Strategy. Where does Austrade fit into this?

As part of the National Hydrogen Strategy, the Australian Government will work to shape the domestic and international markets to open new frontiers for trade – including working with targeted countries to develop bilateral relationships to progress the industry development. Austrade’s focus is to work with Australian and international companies to create commercial opportunities through assisting them in understanding the Australian regulatory environment and the availability of financial incentives for green hydrogen projects (for example through the Australian Renewable Energy Agency).

The pace of announcements from traditional energy firms, investors and government reflects the fundamental strengths of the Australian hydrogen opportunity. Australia is well placed to be a major hydrogen producer. Every state and territory in Australia has regions or hubs with excellent prospects for clean hydrogen production from renewables and fossil fuels with carbon capture and storage.

In July alone, we have seen significant announcements from government and the private sector. The Australian and Japanese Prime Ministers acknowledged energy transition will be part of the Covid-19 economic recovery strategy, including the Hydrogen Energy Supply Chain Pilot project in Victoria and implementation of their 2019 joint Memorandum of Cooperation on Carbon Recycling. Oil and gas major Santos also announced it had begun a concept study on a hydrogen future for the Cooper Basin.

How is policy/regulation helping to support Australia’s hydrogen efforts?

The Australian Government’s total support for hydrogen (committed and available) is now more than $500m. The government takes a technology-neutral approach to clean hydrogen production. Ultimately, our production mix will be customer-led. Our policy settings aim to help the market accelerate the development of technology and infrastructure to make hydrogen commercially competitive as an energy source.

In an ideal world, what would you like to see happen next?

Two key things – we want an acceleration of investment into Australia’s hydrogen sector, and we want existing demonstration projects to scale quickly to demonstrate the commercial viability of hydrogen for domestic and international markets.

Australia has a reputation as a proven partner to Asia’s biggest energy importers. Japan and the Republic of Korea have made ambitious commitments to transition to hydrogen economies and signalled they will be significant importers from 2030. In an ideal world, we would continue to see those markets and others in Europe and ASEAN evolve to the point where the first large-scale export of price-competitive Australian hydrogen can be shipped.

What in your opinion is the biggest challenge for hydrogen in Australia in the near future, how would you like to see it being tackled, and how can Austrade help to overcome these challenges?

Australia’s Chief Scientist, Dr. Alan Finkel, likens the challenge of building our hydrogen industry to the chicken and the egg scenario. To underpin the investment we need to get to scale  we will need offtake agreements in place. To sign offtake agreements, customers want price and supply guarantees. Austrade aims to assist our industry to build the necessary partnerships with international investors and potential customers to overcome that challenge.