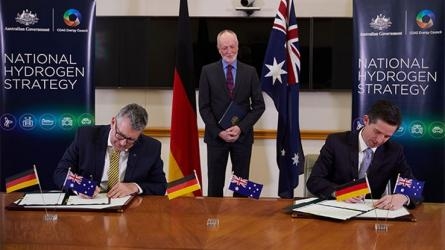 Australia has taken another step forward in its ambition to become a powerhouse in hydrogen production and exports, after the signing of a landmark deal today with Germany.

The agreement signed between the two countries initiates a joint feasibility study into the potential for closer collaboration and the future development of a hydrogen supply chain between Australia and Germany.

Both countries have released national hydrogen strategies to help support and grow the development of renewable hydrogen as a clean source of energy with the potential to lower national carbon emissions.

Minister for Trade, Tourism and Investment Simon Birmingham and Minister for Resources, Water and Northern Australia Keith Pitt signed a declaration of intent with Germany’s Minister for Education and Research Anja Karliczek to carry out a joint feasibility study on trade and investment in hydrogen produced from renewable energy.