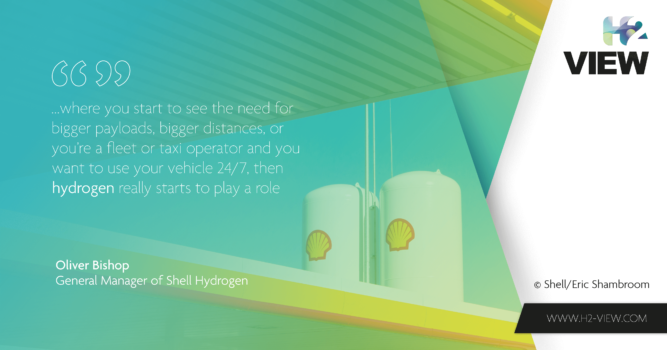 By rail, road or sea: Why Shell is adamant about hydrogen mobility

As we learn in our overarching interview with Shell Hydrogen, the Shell group has both a passion and portfolio for hydrogen energy that pierces perceptions of old. It has a clear commitment to clean energies and hydrogen in particular, backed up by an ever-growing footprint of projects on the ground and confirmed investments.

In its General Manager of Shell Hydrogen, Oliver Bishop, it also has a keen advocate for the clean energies transition and the ‘hugely desirable’ role that hydrogen has to play in this.

Bishop has had the famous Shell logo on his chest for more than 20 years, working in a number of roles across the group in that timeframe and amassing a great insight into both the hydrogen energy movement and the traditional energy landscape. He has been the General Manager of Shell Hydrogen since early 2013, and exudes a very composed excitement for the role that hydrogen has to play across almost all sectors and walks of life.

One of the key applications in this mix is of course mobility – whether that means cars, buses, trains or trucks.

Shell has a diverse portfolio of hydrogen projects across various industries, and a commitment to provide the energy required for all of those. Many of these are green hydrogen in nature, and at large or even mega-scale in their capacity and complexity. Mobility is, however, one of the key areas of focus for Shell and also one of the most discernible to the public at large, just as its current forecourt footprint is of course most synonymous with the company for the masses.

And as we discover in our interview with Bishop, hydrogen power is both invaluable and inescapable in that mobility provision.

“Hydrogen is very versatile in its applications and in transportation it can serve cars, buses, trucks, trains, ferries and ships,” he says.

“Of course we can argue more about cars and whether they should be battery-electric cars – and many people enjoy driving Tesla’s and Shell does fast-chargers for such applications, I myself am a big advocate of e-bikes for example – but that is for a certain application and where you start to see the need for bigger payloads, bigger distances, or you’re a fleet or taxi operator and you want to use your vehicle 24/7, then hydrogen really starts to play a role.”

“Remember, hydrogen vehicles are electric vehicles – it’s a fuel cell electric vehicle (FCEV), there’s no difference. It’s an electric motor, it turns the wheels and off you go. The only difference is where your energy’s being stored, and in this case it’s in a tank of gas. It goes through some technology wizardry that creates electrons and turns an electric motor – and the product out the tailpipe is just water.”

“So, if you’re in those applications with constant or heavy usage, like fleet drivers, then hydrogen really pays off”

“The beauty is that you can fill those vehicles up in just three minutes, you fill it up with let’s say 6kg of hydrogen and there are some tanks now that are bigger, up to 7 or 8 kg, and off you go.” Bishop adds that a good rule of thumb here is that 1kg of hydrogen will take you approximately 100km. “So, if you’re in those applications with constant or heavy usage, like fleet drivers, then hydrogen really pays off.”

As this author reflects on my own experience of hydrogen refuelling a few years ago and the almost underwhelming simplicity of that, I ask if Bishop believes these factors of range of ease of fuelling will see the public very quickly switch on to hydrogen mobility.

“I think like any new technology there’s a period of acclimatisation,” he responds, “but I see that whether it’s for battery-electric vehicles and the requirement to plug it in, and the same with hydrogen vehicles, you have to remember it’s a different experience.”

“Perhaps though, it is remarkably similar to what most people experience with petrol or diesel; you pick up a nozzle, you attach it to the vehicle and press go, and three minutes later it’s filled, you return the nozzle and pay, and leave. From that point of view, it’s no different and a lot of the work that my team has done is to make the whole dispenser experience so much better. We’ve created a new dispenser with a nice look and feel, complete and a nice touchscreen and straightforward instructions.”

“Of course the vehicle itself may be a bit different; for me whenever I get into a new car it doesn’t matter what type of fuel it’s running, it takes a bit of time to get used to it and establish what all the different knobs and buttons do, but once I’ve commuted with that vehicle for a week I’m pretty much there.”

Other areas of road or track mobility that Shell and Bishop alike are invested in are buses and bikes. Shell has had a strong electric-charging business for many years and our interviewee himself has an e-mountain bike which he admits ‘puts a grin on my face’ every time he uses it; when it comes to buses, Shell is currently building a hydrogen refuelling station (HRS) at a bus station in the Netherlands which will see 20+ buses (to be provided by Belgian company Van Hool) in use for the public transit agency.

“These are again very suitable because where a bus operator needs to have flexible routing or needs to warm or cool the vehicle, there’s not a trade-off with how much battery do I have left or do I need a spare battery and so on,” he says, acknowledging that it’s ‘not much fun’ to head out on his e-bike and find that he hasn’t charged that battery, either. 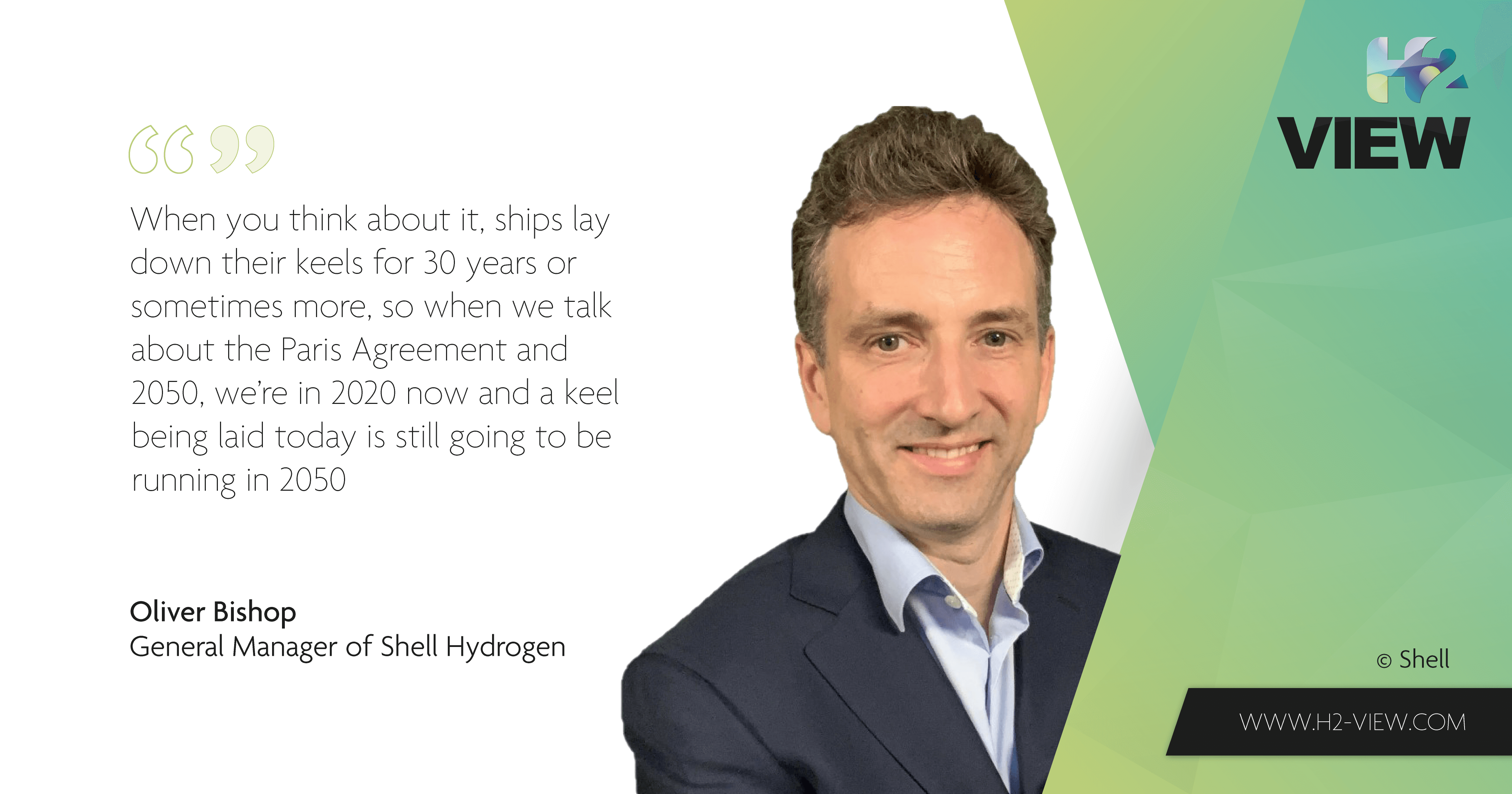 Interestingly, as we move onto discussion of marine mobility and the role of hydrogen, we find that this is one of the hottest topics in the market today and has some very pressing time considerations attached.

Marine is something that Shell is ‘actively looking at very closely’ Bishop says, and refers to the launch of the SUISO FRONTIER liquid hydrogen ship that it launched in December 2019 with partners Kawasaki and Iwatani.

The vessel was developed to provide a means of transporting liquefied hydrogen at 1/800th of its original gas-state volume, cooled to –253°C, safely and in large quantities over long distances by sea. Kawasaki plans to install a 1,250m3 vacuum-insulated, double-shell-structure liquefied hydrogen storage tank, manufactured at Harima Works, on the ship and complete the vessel’s construction by late 2020.

Once complete, the SUISO FRONTIER will be used for technology demonstration testing in Japanese Fiscal Year (FY) 2020 aimed at the establishment of an international hydrogen energy supply chain in which liquefied hydrogen produced in Australia will be shipped to Japan.

“That was launched late last year,” Bishop affirms, “and that ship is demonstrating how you can safely load and unload liquid hydrogen onto a ship, with eventually the idea to be able to transport green liquid hydrogen from places like Australia to markets like Japan. We see that as a very important demonstration step, to showcase that you can achieve and overcome certain technical hurdles, but of course beyond that the challenge for marine is a big one.”

This is where the pressing need in marine markets comes sharply into view. Bishop explains that the lifespan of many vessels can exceed 30 years, rendering the need to clean up marine power arguably more urgent than any other end of the mobility spectrum.

“When you think about it, ships lay down their keels for 30 years or sometimes more, so when we talk about the Paris Agreement and 2050, we’re in 2020 now and a keel being laid today is still going to be running in 2050,” he explains.

“So there’s a real discussion over what is the right way to propel such vessels, and actually at the moment there’s a lot of debate over whether that is via green ammonia, renewable LNG or liquid hydrogen.”

“There are various views there, and each have their pros and cons but undoubtedly you will see some portion of that being run on hydrogen,” he enthuses. We all need energy

Beyond transportation, Shell is keen to point out that hydrogen is undoubted across all sectors – because we all need energy.

Briefly discussing the Hydrogen Council as a force for good and its incredible role in growing the recognition of hydrogen to a global audience of governments and industries, Bishop underlines how significant it is to us all.

“If you’re a Microsoft, Google or an Amazon, you probably have data centres, and those data centres are hugely energy intensive. Every email or click on social media that we trigger off has an energy footprint, and we need a solution to deal with all that data – and the power for that solution. Data centres need uninterruptable power.”

Enter hydrogen, as Bishop explains. “If they are getting a lot of their power from renewables, as we see in a lot of the statements, and they would like to get 100% of their power to be from renewables, then there’s going to be a certain amount of intermittency in that – so how do you smooth out that intermittency, without having to rely on the grid for a bit of back-up power that might still be coal-fired or from natural gas or something else? Again, that’s where hydrogen can play a role because hydrogen is a very effective way of storing power for long periods of time.”