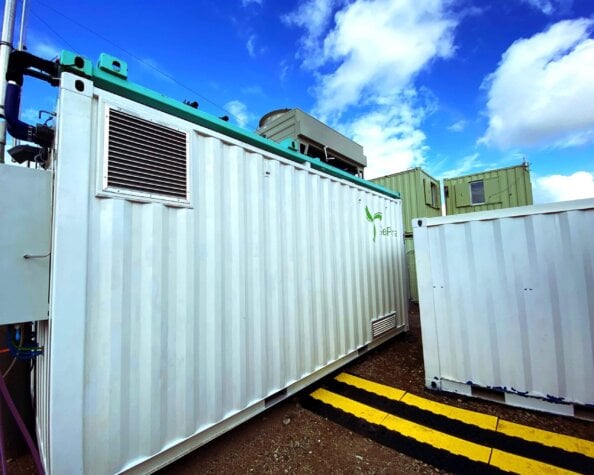 At the site, Cadent, supported by Fastflow Energy Services, is currently constructing a new pressure reduction station – and as part of its graduate programme, tasked a group of aspiring engineers to reduce emissions at the project location.

One the task, Graduate Michael Sinclair, said, “It has been incredibly rewarding to be part of the team that planned this project from its origins in October- to then see the fuel cell deployed and powering our site with clean energy only eight months later.

“It was not easy – but change never is. The hope for the future is that by building upon our work in Tottenham, it is easier to set up the next green-site, and then the next one after that – until sites powered by green energy just become the norm for Cadent.”

The graduate team witnessed GeoPura’s fuel cell technology at the start of the year when a HPU was being used to provide combined heat and power in a world first for the construction industry at National Grid’s Viking Link construction site.

After witnessing the unit in operation, they were soon eager to replace conventional diesel generators used to power the London-based welfare cabins with the zero-emissions alternative.

Andrew Hejdner Senior Project Manager at Cadent, added, “The graduate engineers have a taken a theoretical problem and developed a tangible solution to work towards solving a significant industry wide problem on one of the UK’s largest regeneration developments.

“The trial of this hydrogen powered fuel cell could have a massive effect on how we work in Cadent on major projects in the future. I’m proud that we are the first gas distribution network to use hydrogen in this way and its thanks to the passion and enthusiasm of the graduates and project team that we secured the fuel cell in an area of industry that is receiving a lot of focus.

“In conjunction with several other initiatives including HVO fuel (a diesel substitute) and hybrid construction machinery we are trialling on the project, we have taken another step towards Cadent’s NetZero ambitions.”

The UK’s five gas network operators unveiled a plan in April 2020 to create the world’s first net zero gas network by speeding up the switch from natural gas to hydrogen for the 85% of UK households connected to the gas grid.

Did you read H2 View’s exclusive interview with Matt Hindle, Head of Gas at ENA? If you missed it, catch up here.