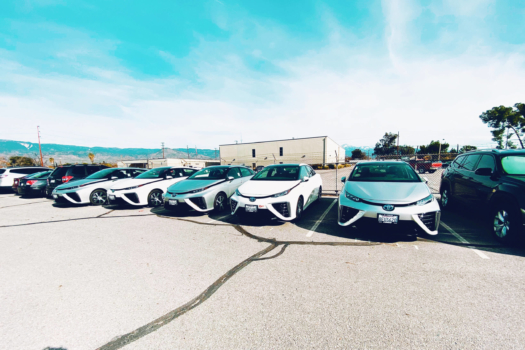 StratosShare, a shared-vehicle programme of StratosFuel, allows users to rent hydrogen fuel cell vehicles on-demand by hour or day through a smartphone app.

The company is funded in part by a grant from the California Energy Commission, which provided the initial capital to purchase the first fleet of Toyota Mirai.

Today in the latest company development, StratosShare announced the signing of an agreement with San Bernardino County – the largest county in the US.

Through the new pilot agreement, the County of San Bernardino will house five of the StratosShare’s fuel cell vehicles at its Fleet Management yard in the County.

The partnership is the first of its kind where the San Bernardino Country is having a shared fuel cell electric vehicle fleet available for its employees through the StratosShare app.

With less than a year of operation, StratosShare has deployed vehicles to various locations such as airports, universities, downtowns and offices in St Bernardino and Riverside Counties.

“By utilising the hydrogen-powered StratosShare vehicles, we hope to demonstrate the viability of the car share concept in fleet operation, while reducing tailpipe and greenhouse gas emissions in the County fleet,” said Ron Lindsey, Fleet Management Director for San Bernardino County.

The free StratosShare app enables users to reserve, unlock, start and pay rental fees all from their phone without membership or annual fees.

Every trip includes hydrogen fuel and maintenance, making it convenient for short and long-term rentals. The vehicles are located in high-density areas and are accessible 24-hours a day.

“By partnering with the largest County in the US, it furthers our strategy to increase hydrogen demand as well as demonstrate the effectiveness that fuel cell vehicles have in a fleet setting.”

StratosShare is currently expanding its car rental programme throughout Southern California and is looking to introduce it into other areas of the State.

The company also has plans to develop more stations to support its growing fleet.