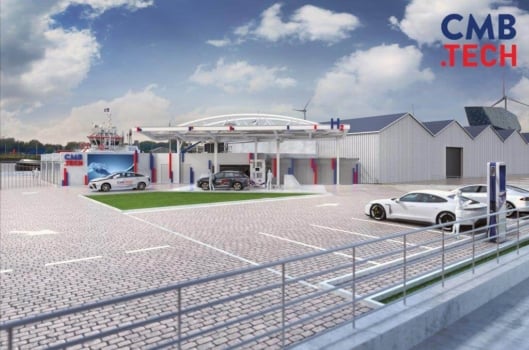 Expected to be completed in March 2021, CMB.Tech, the research and technology arm of Compagnie Maritime Belge (CMB), said it will be the first hydrogen station in the world that produces and is capable of supplying green hydrogen to cars, buses, trucks and ships.

CMB is strongly committed to hydrogen with the launch of hydrogen-powered passenger vessel Hydroville that has up until now been supplied with hydrogen from a tube trailer.

To be able to supply larger ships with hydrogen, a refuelling station is a necessity.

“CMB.Tech’s ambition is to become the reference in the field of hydrogen technology for large-scale industry applications with a focus on the maritime and transport industry,” said Roy Campe, Managing Director of CMB.Tech.

“Having a hydrogen refuelling station is essential. We want to demonstrate that this technology is ready to scale up and that the maritime industry is playing a pioneering role in the transition to alternative energy sources.”

“We hope it will encourage other companies to take steps to use hydrogen as the fuel of the future.”