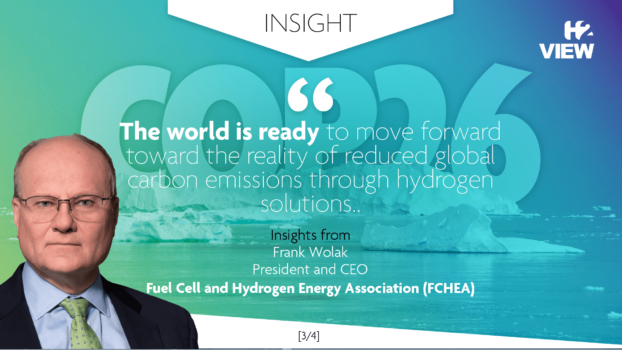 COP 26: All roads lead to hydrogen

Climate change is now viewed not only as one of the greatest threats to the environment, but also to economic and energy security.  In 2020, there were 22 reported separate billion-dollar weather and climate disasters across the US.[1] Repairing infrastructure and other damage from flooding, drought, heat, cold, hurricanes, and other extreme weather, as well as restoring power to the electric grid after weather-related outages is becoming far too costly and dangerous to ignore any longer.

In the five years since the Paris Climate Accord was introduced at the United Nations (UN) Climate Change Conference of the Parties (COP), the realisation that decarbonisation is critical to achieve the necessary emissions reductions to mitigate these disasters has grown starker. As COP 26 convenes in Glasgow, Scotland, tens of thousands of dignitaries, delegates, stakeholders, and activists from around the world will look to build upon that historic agreement and propose real solutions to combat climate change before it is too late.

Hydrogen energy and fuel cell technologies have emerged as a key tool to help in that fight. Neither is new to the energy scene, but both are now being hailed as critical components to reducing carbon emissions for a range of market sectors. At the COP 26 summit, it is expected that hydrogen is poised to play a big role in discussions and plans on how to meet any goal that has or will be set.

Hydrogen can be produced from a variety of low and zero-carbon feedstocks and methods, including renewable energy sources such as solar or wind-powered electrolysis, biogas or waste gas, nuclear, or other low-carbon sources, such as natural gas with carbon capture and sequestration. Its appeal lies in that flexibility, allowing for hydrogen generation utilising localised resources and pathways.