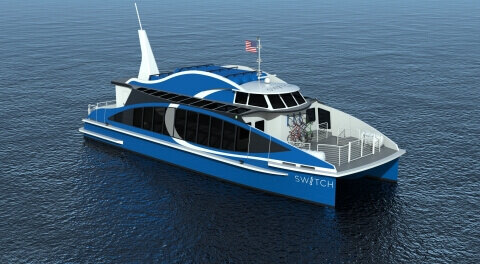 Cummins technology is set to power a first-of-its-kind hydrogen ferry in California, US.

Cummins’ fuel cells are being integrated into North America’s first commercial hydrogen-powered zero emissions ferry (ZEF), which will also demonstrate and test the potential of commercialisation of fuel-cell powered marine vessels to the global maritime industry.

The Sea Change is powered by Cummins’ 360kW fuel cell and can reach speeds up to 22 knots.

The fuel cells are supplied with hydrogen from storage tanks creating electricity to run the electric motors and turn the vessels propellers, generating the ferry’s movement.

With the ZEF only producing water and electricity as a by-product, it’s 100% emissions free.

“Fuel cells are an attractive solution for decarbonisation of marine vessels for several reasons,” Cummins explained in a statement.

“They are zero emissions, silent and scalable. Plus, they are flexible because the power from the fuel cells is transported through wires, the fuel cells can be placed almost anywhere on the vessel.”

In the case of the Sea Change, the fuel cells are placed in a room at the back of the main cabin, while the hydrogen storage tanks are up at the top deck.