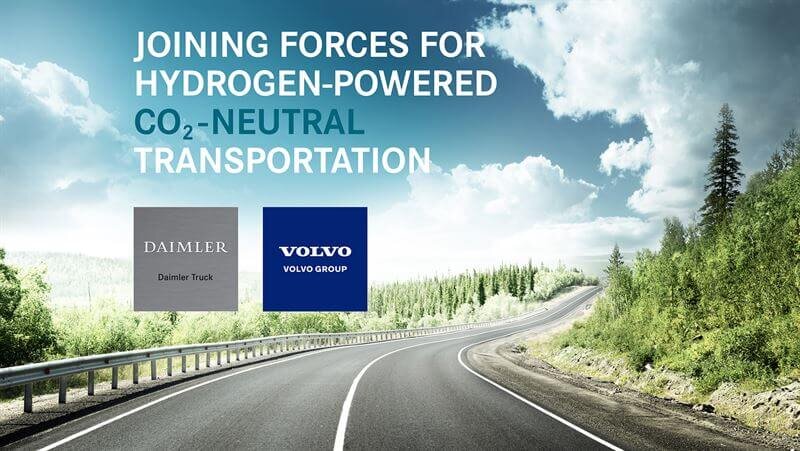 Daimler and Volvo move forward with plans for hydrogen trucks

The German truck maker and its Swedish competitor want to start with customer tests of trucks with fuel cells in about three years and to be in production during the second half of the decade.

Volvo will acquire 50% of the joint venture, Daimler Truck Fuel Cell, for around €0.6bn, meaning the two companies will own equal interests.

Volvo and Daimler will continue to be competitors in all other areas such as vehicle technology and fuel cell integration in trucks, the two companies said.

“We are both fully committed to the Paris Climate Agreement for decarbonising road transport and other areas, and to building a prosperous jointly held company that will deliver large volumes of fuel-cell systems.”

The joint venture will take advantage of the expertise and extensive experience from several decades of development work on fuel cells at Daimler.

“In the future, the world will be powered by a combination of battery-electric and fuel-cell electric vehicles, along with other renewable fuels to some extent,” said Martin Lundstedt, President and CEO of the Volvo Group.

“The formation of our fuel-cell joint venture is an important step in shaping a world we want to live in.”

In addition to trucks, there are also other areas of application for this type of fuel cell system, Daimler said.

The joint venture will develop a system with several power stages, including a twin system with 300kW continuous power for heavy-duty long-haul trucks.

Based on the demanding conditions in heavy-duty truck applications, the joint venture’s products are also ideally suited for other use cases such as stationary power generation.

Closing of the transaction is expected during the first half of 2021 and is still subject to merger control review by the relevant authorities, as well as other approvals.