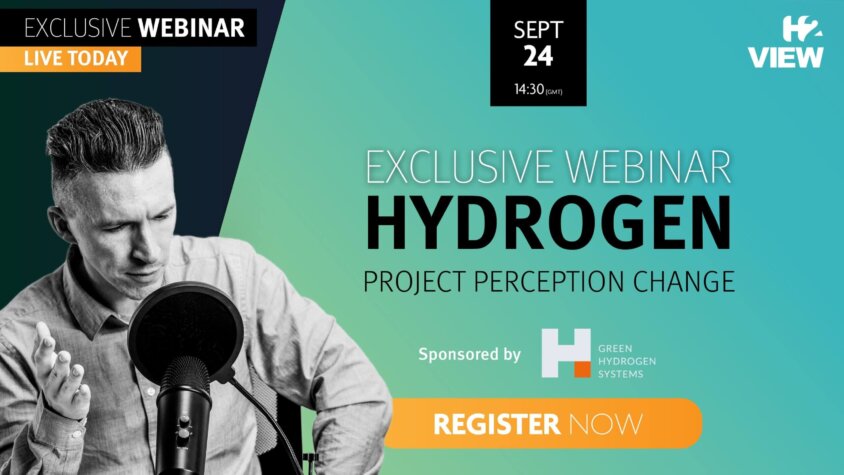 Dispelling myths and changing the perception: Hydrogen is not only safe, but very effective

“The biggest mistake in hydrogen is that we talk about price instead of value,” Chris Jackson, CEO of Protium, told H2 View’s Project Perception Change webinar today (Sep 24).

“If you want to understand the history of energy transitions, and of any technology, it’s never to do with price,” he explained.

“Once you get people engaged with the new potential of a technology, at that point, cost started to become a material factor. I think when we talk about green hydrogen today, we don’t do enough to explain the wonderful things it can do.”

An advocate for green hydrogen in particular, Jackson is realistic when it comes to the build out of a hydrogen economy in the UK and believes the country needs to be realistic when laying out timelines, something which he has already expressed to government and policy makers.

“The first thing I’m doing is trying to give them [governments and investors] a realistic sense of timeline. I think people have a very poor perception of timelines. If you want to have a multi-gigawatt green hydrogen production facility in the UK, you can’t just go from a few 1MW plants straight to one gigawatt.

“To meet targets, you’re going to have to build some 5MW, some 10MW, and to think about what kind of market that means. It’s probably going to be more distributed, so how do you build that?

“I do think there is a huge misperception around the idea that electrolyser companies can snap their fingers and suddenly have 20GW, 30GW of manufacturing capacity. I mean, they’re very good, but they’re not that good – And there is a need to understand the scaling up.”

He continued, “I think it’s great to set targets, that’s really important, and I think that’s the one thing that the UK Hydrogen Strategy did very well, but then you have to follow that up.

“You can’t just say we’re going to have 20%-20% of UK energy as hydrogen by 2050, and then go but we want five gigawatts by 2030, because you start looking at these two things and they just do not make sense.

As well as focusing on building and scaling up a green hydrogen economy in the UK, Jackson also highlighted some questions he has around investment, and making the most of strategic marketing and campaigning when it comes to getting the public onboard with hydrogen.

Misconceptions need to be addressed

“The three biggest myths of hydrogen” was the focus for Cody Bateman, CEO of GenH2, during his discussion on the webinar. Stating that misconceptions need to be addressed, Bateman highlighted just how much the hydrogen industry has prioritised safety, but how such effort still needs to be fully recognised by the wider public globally.

Detailing the three myths, Bateman said that safety is number one. “While hydrogen has its safety issues, the industry has continued to prioritise hydrogen safety measures – and it’s really four safety issues that we see that get brought up all the time.”

“First of all, the question is hydrogen toxic? Well, it’s not. Unlike many conventional fuels we use that have some toxicity to them, it’s not strictly true with hydrogen,” he explained.

“The second thing is that people don’t understand that hydrogen is 14.4 times light that air so it disperses quickly when it is exposed, so if there’s a hydrogen leak there’s not such an issue it being in the air.

“Another key point on the safety is basically hydrogen flames are just not as hot as gasoline flame. The reason why that’s important is that it significantly reduces the secondary fires that could potentially come up if there was a disaster.

“The fourth thing on the safety is that basically hydrogen requires a significantly higher requirement for an explosion than other fossil fuels. So once again, as I mentioned before, it disperses quickly.

“We just need to change that perception that hydrogen is not only safe, but very effective.”

Change needs to be made

“If we want to transform our energy system to be a renewable energy system, we have to make a change.” That was the strong message from Kasper Tipsmark, Chief Technology Officer of Green Hydrogen Systems, sponsor of the webinar.

“I believe that we have a task to solve as both as humans, people and nations to counteract climate change we see in our everyday lives. Electricity from wind and solar cannot cover all of our energy system.

“We have to change into an energy system that also based on molecules generated from renewable electricity – and one of them is hydrogen. We have to have a more realistic view of our energy system and how we design it. Some people still believe that if we just put up enough wind turbines and solar cells, that’s going to solve everything, that’s not the case.”

Again, public perception on the energy carrier was a focus for Tipsmark, with awareness and ease being two key points for him. “You need to create awareness and there has to be no hassle for people to convert to hydrogen.

“If you need to buy a car, your nearest hydrogen refuelling station should be closer than 50 miles. We need to build the infrastructure needed and we need to talk more about what is hydrogen. I think there’s quite a lot of awareness missing.”

From Monday, H2 View’s Project Perception Change webinar will be available to watch on demand. You will be able to catch the full thing here.