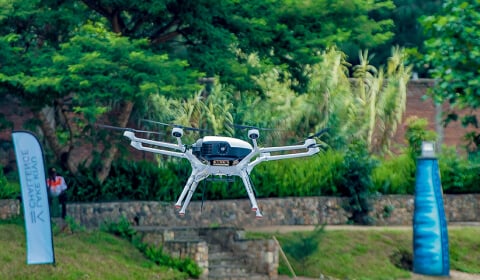 The company wanted to demonstrate the key benefits of drone utilisation in Africa and how it can improve the lives of its citizens.

The company successfully completed 30 minutes of flight time with enough hydrogen left for over two hours of extended flight.

DMI said the benefits to Africa of extended flight time are monumental, including applications for the supply of medicines and blood, business purposes, disaster analysis and relief, communication capabilities, and more.

DMI’s CEO, Doo Soon Lee, was also a key speaker during the symposium and spoke regarding the benefits of long endurance flight for emergency delivery as well as other applications.

According to Lee, “A hydrogen fuel cell drone used in blood delivery can travel more than 70km in a flight. We can help save as many as 5,000 lives a year with one hydrogen drone.”

Currently, most drone blood delivery in Africa is supplied by fixed-wing drones that generally have a payload max of about 2kg

DMI’s hydrogen fuel cell drone has a maximum payload of 5kg – making it possible to deliver twice as much blood per flight.

Hydrogen drones to be deployed in Hungary