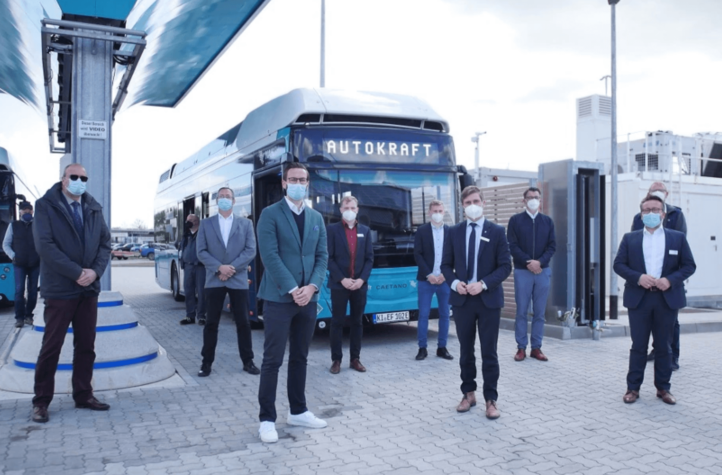 Two hydrogen fuel cell buses have been handed to Autokraft in Niebüll as part of the eFarm project.

With this, the eFarm project has entered into its last phase by putting the hydrogen buses into practice.

The buses, once fuelled, will be capable of travelling 400km and corresponds to a regular operating day in line traffic meaning that the buses can be used flexibly on 50 bus connections around Niebüll and Husum.

Launched by the GP Joule Group, the project consists of an eFarm which converts renewable energy from five wind farms into hydrogen.

The hydrogen is then transported to two public refuelling stations in Husum and Niebüll with the project supplying 100% green and regionally produced hydrogen to residents and companies who wish to use a hydrogen-powered vehicle.

Daniel Marx, Chairman of the regional management of DB Regio Bus Nord, responsible for Autokraft, said, “Thanks to eFarm, we are the first bus company in Germany to be able to refuel not only with climate-neutral, but also regional hydrogen.

“We are looking forward to the experience that we will gain with fuel cell technology in daily use, because it is our declared goal to use alternative drives in Schleswig-Holstein to help drive Holstein local public transport.”

Florian Lorenzen, District Administrator, said, “The eFarm project in the Nordfriesland district is creating a blueprint for sustainable mobility that more and more regions across Germany are following.

“With the handover of the two buses, we are also putting the final stage of the eFarm project into practice.”