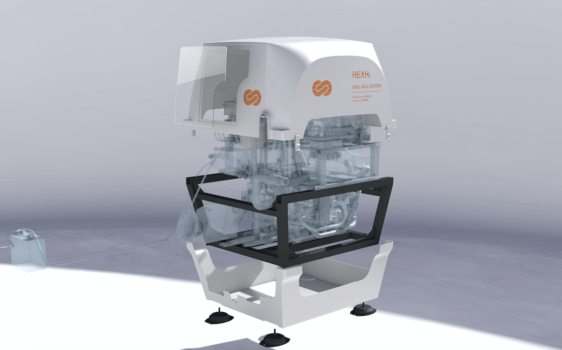 At the festival, the solution will be integrated for the first time in a vessel other than Energy Observer: a 40-foot open boat developed with HYNOVA Yachts – the first production electro-hydrogen tender to be launched on the market.

It has been tested in real conditions aboard Energy Observer over more than 7,000 nautical miles.

The HYNOVA 40 is a 12m boat designed by Chloé Zaied, founder and Managing Director of Hynova Yachts, which can be used as a day-boat or superyacht tender.

With a capacity of 12 passengers, it is the first pleasure boat equipped with the REXH2, a zero emissions, silent and hydrogen-electric hybrid technology intended to be manufactured in series.

The solution developed by EODev to meet the specifications of the HYNOVA 40 consists of the latest generation Toyota fuel cell, the T-Module, which can supply up to 80 kW, supplemented by three 44kW LiFePO (Lithium-Iron-Phospate) batteries designed by EVE Systems and approved for maritime use, and two BorgWarner electric motors developing a power of 184 kW each (approximately 2 x 250 HP in diesel equivalent).

The set has been designed to allow the boat, which weighs around nine tonnes, to reach 22 knots at maximum speed and have a working speed of 12 knots.

The operating speed limit with the fuel cell alone is eight knots, the boat being able to cover up to 69 miles at six knots in full autonomy, combining the performance of the cell and batteries. 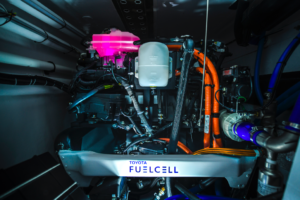 “This prototype and its REXH2 are the precursors of tomorrow’s pleasure boating, paving the way for the yachting world to become one of the main players in the energy transition, for maritime mobility to be in harmony with the marine environment,” Jérémie Lagarrigue, Managing Director of EODev, said.

The electricity produced onboard the HYNOVA 40 by the REXH2 fuel cell is used directly to supply energy for the boat’s propulsion chain via an electric motor, and is also stored in batteries which can make it available for propulsion and on-board systems, as needed.

The hydrogen gas that feeds the system is stored in compressed form, at 350 bar, in specially designed tanks placed in the body of the boat, on a part located outside the structure of the vessel so as to benefit from a direct air intake.

The HYNOVA 40 will thus have, in this first configuration, three tanks with a total capacity of 22.5kg of hydrogen.

The advantage of the hydrogen-electric combination in comparison with a 100% electric system, in addition to a significant saving in weight, and therefore in energy consumption, is to make it possible to manage the needs according to the needs. using the continuous power of the fuel cell in “cruise” mode, while being able to instantly use battery power during sporadic peak power needs.