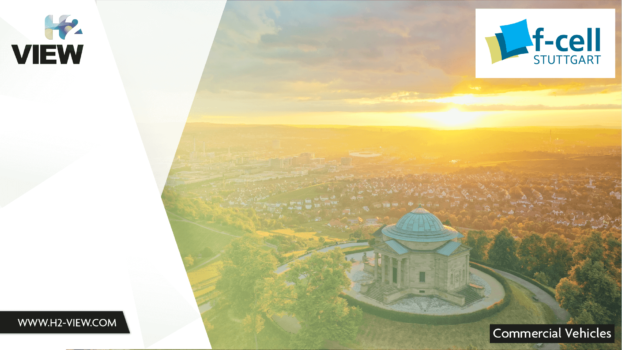 Those were the words spoken by Gerrit Marx, CEO of IVECO and he presented in the Commercial Vehicles session at f-cell in Stuttgart, Germany, this afternoon.

With a focus on meeting the European CO2 emissions reduction targets for heavy-duty vehicles, Marx discussed the current availability of hydrogen and how he thinks the market will utilise such resources.

“Today’s hydrogen production is 95% grey, and that’s very bad,” he said. “We want to go to blue hydrogen, and then ideally green hydrogen, but at this moment in time, the vast majority is grey.”

“We are at the conviction that the broad base hydrogen applications across different industries, and predominately in our heavy-duty commercial vehicle segment, is going to be blue hydrogen.”

Talking to the audience, Marx explained that although blue hydrogen is not the perfect solution, it is most definitely a step in the right direction as companies much like IVECO try to advance zero emission solutions.

“It is not perfect, but I consider it also irresponsible to ask for the absolute perfect technology before we start,” he told the audience. “We have to go blue and we will go with compressed solutions in the blue side, before we step by step see more and more green hydrogen coming to market.”

“The fuel cell doesn’t have a colour code and we, as truck OEMs, need to get our metal on the road as fast as possible to gain experience and grow reliability in our electric powertrains.”

“Blue hydrogen is there. Green hydrogen needs ten times more energy than blue hydrogen, and in order to be quick and to do the right thing we need to start with something that is not perfect.”

Next to take to the stage was Dr. Jan Kröng, Head of Strategy for Daimler Trucks. “We at Daimler Trucks have an ambition to deliver all CO2-neutral vehicles by 2039, supporting society to become CO2-free by 2050,” he enthused to the audience.

The second Daimler speaker of the day, Kröng focused on the company’s hydrogen and battery innovations and why Daimler is “betting on” the two technologies, as the company works to achieve its ambitious goals.

Kröng said, “The two technologies we believe in to support zero emission are electric trucks and hydrogen trucks. These are the only technologies that have the full potential at the end to be really zero emission, because they have the chance to produce green energy from green renewable resources.”

“Why are we betting on these technologies? That’s because we have different profiles of our customers. We have a very diverse portfolio in the trucking industry from short haul to long-haul, from construction to distribution.”

Talking about the company’s widely ranged product portfolio, Kröng discussed which technology are best suited to which vehicles, highlighting the advantage of hydrogen fuel cell technologies in long-hail transportation vehicles.

“The good thing is at Daimler Trucks; the future has already started. We revealed two weeks ago our GENH2 Truck, our hydrogen truck, in Berlin. We are convinced it will lead this this segment [heavy-duty trucks] into the future.”

After giving some more details about the GENH2 Truck, Kröng then went on to tell the audience more about Daimler’s joint venture with Volvo and it’s plans to cooperate with Rolls-Royce to develop fuel cell generators.

Welcoming the audience, Knight told attendees a little more about the company and its ambitions. “We see our mission very simply, as accelerating the energy transition,” he told f-cell attendees.

“By working with hydrogen partners, we offer our hydrogen fuel cell vehicle, with a goal of achieving total cost of ownership (TCO) matching diesel vehicles within the next two to three years.”

Moving outside of the states, Knight then went on to tell the f-cell crowd about Hyzon Motor’s European joint venture with Holthausen Clean Technology in the Netherlands, through which Hyzon vehicles are being built in the Netherlands.

“The vehicles we are using to accelerate the hydrogen transition, or hydrogen revolution, are high utilisation, commercial vehicles,” he enthused.