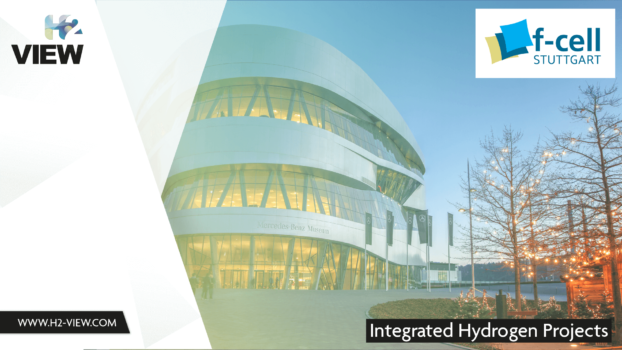 Green hydrogen was the focus for f-cell Stuttgart’s Integrated Hydrogen Projects session this afternoon, as H2 View concludes its coverage of day one of the event.

“The HyLand initiative is the regional approach of the National Innovation Programme. We wanted to address all kinds of regions in Germany because when we started to think about it, we realised that regions are on a very different level when it comes to hydrogen,” he said.

“There are many regions in Germany who think or have the pressure to act and to find solutions in transport and other sectors, but they don’t really know how to start.”

The varying levels of knowledge and experience in the different regions was taken into account in the funding process, as all regions should have the opportunity to become hydrogen regions.

“We invented three categories of regions: the HyStarters, which have very low ambitions but have an interest; HyExperts, which have already developed concepts and have actors in their regions who want to deepen their concepts; and we have the HyPerformers, regions who are the frontrunners who are ready and just need financial support,” Braunsdorf explained.

In total, the HyLand initiative had 25 regions, now funded in the first round, which are comprised of nine HyStarters, 13 HyExperts and three HyPerformers.

NEOM is a region in Saudi Arabia being built from the ground as a living laboratory and a vision of what a new future might look like.

It also has an ambition to become the world’s largest producer and exporter of green hydrogen, chemicals and fuels through dedicated partnerships and alliances.

“NEOM is a place where entrepreneurship will chart the course for this new future and a destination and home for exceptional liveability, thriving businesses and reinventing environmental conservation,” Kappner said.

“It will be one of the first climate positive societies powered by abundant low-cost renewable energy.”

“NEOM hosts an unrivalled complementary wind and solar profile with high capacity factors. It has a unique opportunity to build an innovative carbon-free energy ecosystem from scratch. It will become an integrated hub for the second wave of energy transition.”

According to Kappner, NEOM will leverage on multiple assets to become a leading green hydrogen supplier:

He then highlighted the $bn plans announced in July to construct a world-scale green hydrogen-based ammonia production facility powered by renewable energy in the region.

The plant will be equally owned by NEOM, Air Products and ACWA Power, and it will produce 650 tonnes of green hydrogen per day, converted into 1.2 million tonnes of green ammonia per year.

Last to speak, was Barney Crockett, Lord Provost of Aberdeen, who gave an overview of Aberdeen’s hydrogen strategy.

Aberdeen is one of Europe’s pioneering hydrogen cities. Through the work of Aberdeen City Council, the Scottish city has developed a cluster of hydrogen activity with two publicly accessible hydrogen refuelling stations (Kittybrewster and ACHES) and one of the largest and most varied fleets of hydrogen vehicles in Europe including buses, cars, vans, road sweepers and waste trucks.

The city will be the first deployment location for the world’s first fleet of fuel cell double decker buses from Wrightbus, due to be delivered in Autumn 2020.

“We aspire now to become as low carbon as we possibly can, in line with various targets. Indeed, we have announced our own net zero vision to become a climate positive city and have developed our strategic infrastructure plan to support this, and hydrogen is the key to that,” Crockett said.

“We aim to be a centre of excellence for hydrogen and fuel cell technologies and we are working very hard on that.”

“We’ve had a hydrogen strategy in place and have been interested in hydrogen for quite a long time. It’s part of our strategy to develop our local economy.”

“The strategy is designed to encourage hydrogen usage in a whole range of different areas to develop a world leading hydrogen economy in Europe.”