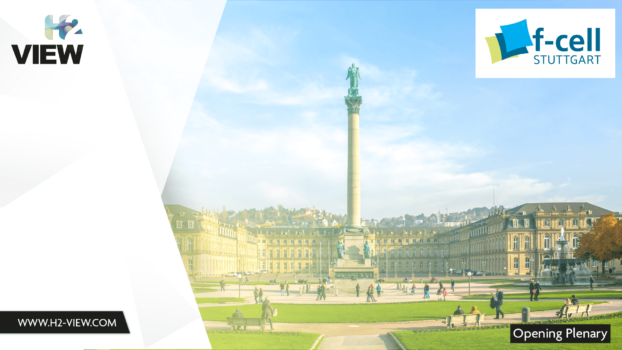 “In a time of change and uncertainties, we have to focus on how to overcome big challenges. The Green Deal announced by the European Commission is one important answer,” Sibylle Hepting-Hug, Head of Department in the Baden-Württemberg Ministry of Environment, Climate and Energy Industry, told a near-500 strong audience of key stakeholders in the hydrogen and fuel cell industry this morning.

“This answer includes developing and implementing the hydrogen and fuel cell technology in many fields. There have been times in the past 20 to 30 years when people were sure that the fuel cell would prevail. But it has indeed taken a few years after all.”

She was speaking at one of the oldest international hydrogen and fuel cell trade events, f-cell, in Stuttgart, Germany, which this year celebrates its 20th anniversary in hybrid style.

Whilst around 500 delegates are on the ground attending in person at the grand 19th Century Haus der Wirtschaft, participants are also tuning in from around the world virtually amid the ongoing Covid-19 pandemic.

The two-day event will discuss what the future of hydrogen and fuel cell technology will look like.

“If you look at current developments around the world and especially Asia, there is no going back. Hydrogen and fuel cell technology is taking off in all areas,” Hepting-Hug continued.

“Buisnesses are developing and governments now see the need to massive support to enhance further developments and implementation.”

“Since January, we have been eagerly awaiting the National Hydrogen Strategy, which was then published in June. And, in July, the European Strategy on Hydrogen followed.”

“Current times are very dynamic and a lot has been happening here In Baden-Wuerttemberg as well.”

Updating on activities and current developments in Baden-Wuertteberg, Hepting-Hug said, “For several years now we have been supporting the hydrogen and fuel cell technology through funding programmes, for example hydrogen infrastructure or by procuring fuel cell heating equipment.”

“Two projects are currently underway which we are funding as a part of the programme Transformation of the Energy System in Baden-Wuerttemberg.”

“The first project focuses on the development of a hydrogen model region around Freiberg. In the second project, a 26-tonne truck is being converted to a fuel cell drive.”

“Furthermore, we are also supporting the project H2Rivers which have been successful in the national call for tender by the federal government.”

“We are shortly funding a project that focuses on implementing 40 fuel cell range extender buses for public transportation in two cities.”

“At the end of this year we are planning to tender a hydrogen model region for the upcoming EADF, the European Regional Development Fund, from 2021 to 2027.”

“Within this model region, we want to demonstrate on a local and regional level, that a hydrogen economy can work. Startin with the production of green hydrogen, storage and transport, up to hydrogen and fuel cell applications, a complete and functioning eco system is to be established.”

Kurt-Christoph Von Knobelsdorff, Managing Director of National Organisation Hydrogen and Fuel Cell Technology (NOW) GmbH was the next speaker to the stage to discuss the German Hydrogen Strategy.

Within his presentation, Knobelsdorff gave attendees details on each of the 38 measures within the strategy that cover climate change, research and innovation, economic and regulatory frameworks, as well as international cooperation.

Hydrogen production, hydrogen use, infrastructure and supply, research, education and innovation, European actives and the international hydrogen economy were all discussed throughout his time on stage.

With a focus on measures six to thirteen, Knobelsdorff discussed the section of the Hydrogen Strategy which focuses on the use of green hydrogen within the transportation sector.

Talking about the use of green hydrogen within the sector, he discussed NOW’s National Innovation Programme and how the organisation is currently working to develop the programme which is deploying a variety of hydrogen-powered vehicles across Germany.

Moving from the vehicles themselves to the supporting infrastructure, Knobelsdorff highlighted Germany’s impressive array of hydrogen refuelling stations.

“The National Hydrogen Strategy commits to fostering the refuelling infrastructure for hydrogen in Germany. With more than 84 hydrogen stations right now, Germany has one of the best networks worldwide,” he said.

“Of course, this network is of high strategic value for the whole hydrogen strategy. The challenge now is to secure utilisation of these refuelling stations with German OEMs.”

“Both Toyota and Hyundai have already said they have plans to bring a considerable share of the production of the new Mirai and NEXO to Germany in 2021, and we are ready to fund them.”

He also emphasised another main focus for the strategy is to decarbonise the industry sector.

Bart Biebuyck, Executive Director of the Fuel Cells and Hydrogen Joint Undertaking (FCH JU) gave an overview of the European Hydrogen Strategy next, which was launched on 8th July.

Read more: A hydrogen strategy for a climate neutral Europe

He said the FCH JU-led study Hydrogen Roadmap Europe led to the European Commission taking some additional initiative on hydrogen, which resulted in the European Hydrogen Strategy.

“Last year we did this study which contained a hydrogen vision for 2030 and 2050. As you can see by 2050, 24% of Europe’s energy needs could be delivered through hydrogen. Most importantly we could have annual revenue of €20bn and 5.5 million jobs could be created,” Biebuyck highlighted.

He then moved on to discuss the Clean Hydrogen Alliance, also launched on 8th July.

“It’s mission is pretty simple: to create a pipeline of projects for massive roll out of EU clean hydrogen technology,” Biebuyck said.

“It will involve all the stakeholders in the clean hydrogen ecosystem and very important here we want to bring together supply and demand. There were other alliances in the past and it didn’t always bring this together, so in this alliance we really want to make sure we have supply and demand together in one alliance, so that we can be successful together.”

“So the Clean Hydrogen Alliance aims to build up a robust pipeline or investments, establish an investment agenda, support the scaling up of the hydrogen value chain across Europe, facilitate and help implementing the actions of the new European Hydrogen Strategy and massively scale up production and demand for clean hydrogen.”

“We estimate investments of €430bn by 2030 will be required to be successful.”