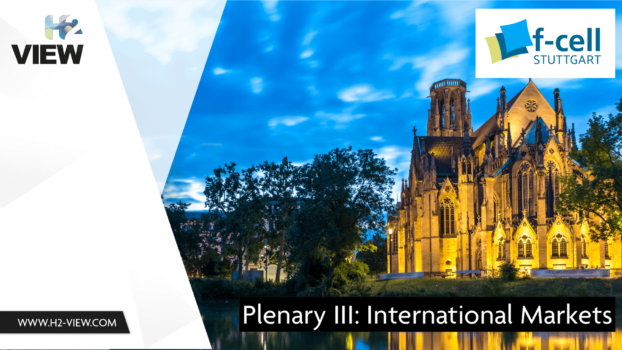 First to take the stage was Chen Wei from China’s Machinery Industry Federation. Whilst virtually addressing the audience, Wei discussed China’s rapidly developing hydrogen market but also some set backs that she believes the country is facing.

Read more: China the most important player in the hydrogen industry

Wei also discussed polices that are in place and highlighted some of the key cities that have been identified to play a key role in China’s hydrogen economy, including: Shanghai, Foshan, Wuhan and Zhangjiagang.

Without a doubt, China’s hydrogen and fuel cell market is growing tremendously. The country is not only the world’s largest energy user, but also the largest producer of hydrogen, generating roughly 20-22 million tonnes of hydrogen in 2018.

Although the country is without a doubt doing its bit to reduce its emissions, Wei identified four difficulties she believes the industry is currently facing in China:

Illustrating just how quickly the market has grown in recent years, Wei said, “From 2016 to 2019 the number of fuel cell electric vehicle sales grew from 629 to 2,727. That growth is very fast.”

Giving an update on Japan’s plans for realising a hydrogen society, New Energy and Industrial Technology Development Organisation’s (NEDO) Eiji Ohira was the next speaker.

Supported by NEDO, the Hydrogen Energy Supply Chain (HESC) is a pilot project to safely and efficiently produce and transport clean hydrogen from Victoria, Australia’s Latrobe Valley to Japan.

It will see liquefied hydrogen produced from Latrobe Valley brown coal transported to Japan for use in fuel cell electric vehicles and power generation, in one of the world’s first efforts to commercialise technology to liquefy and transport hydrogen.

Ohira highlighted Japan’s Basic Hydrogen Strategy during his presentation, which shows future visions that the country should achieve with an eye on 2050, and also serves as an action plan to accomplish the visions by 2030.

The strategy sets a goal that Japan should reduce hydrogen costs to the same level of conventional energy, e.g.gasoline and LNG,and to achieve the goal, provides integrated policies across ministries ranging from hydrogen production to utilisation under the common goals.

Ohira also discussed Japan’s Strategic Roadmap for Hydrogen and Fuel Cells, which was unveiled in March 2019.

The roadmap states, “Public implementation of hydrogen technologies takes at least five years once they become technically possible to be commercialised.

“Taking this into account, it is important to have a future prospect, for example, setting up a technical development target within five years with an eye on the future possible society after ten years.”

The document provides future milestones and then presents an action plan as a means of realising them.

The roadmap provides Japan’s policy direction for realising a hydrogen-based society as an important element of the Basic Hydrogen Strategy.

Last to take to the stage this morning at f-cell, was Professor. Dmitri Bessarabov, Director at HySA Infrastructure Competence Centre.

With an overall goal to develop and guide innovation along the value chain of hydrogen and fuel cell technologies in South Africa, HySA hopes to develop a cost competitive solution for the local generation of hydrogen.

Bessarabov, who is currently leading PEM electrolyser development projects at HySA, spent his time on stage talking about developing a South African hydrogen roadmap and how it would benefit the country.

Within his presentation, Bessarabov discussed the High-Level Hydrogen Society Roadmap (HLHSRM). Talking about the roadmap he said, “The overall goal is the effective integration of hydrogen related technologies in various sectors of the economy/society to foster inclusive growth and help reduce poverty and inequality. “

“The purpose of the HLHSRM is to align stakeholders around a common vision on hydrogen-related technologies for the country in order to create an environment where investment decisions can be made to unlock the social economic benefits that can accrue through its implementation.”

He also spoke in depth about South Africa’s mining sector and how hydrogen technologies could help to reduce the sector’s carbon emissions.