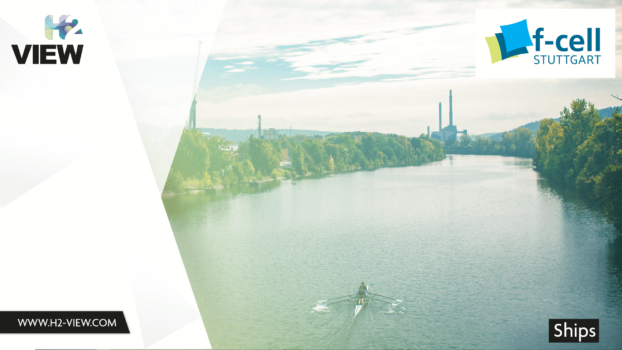 “The public pressure on getting ships cleaner has been significantly increasing over the last decade. That is particularly noticeable for passenger shipping,” Ragnar Christenson, Project Manager of Research & Innovation at Meyer Werft told f-cell attendees this afternoon.

“That is the reason why MEYER WERFT, together with a consortium of partners has been looking into the topic of fuel cells, new fuels and alternative energy production for over a decade.”

Speaking as part of the Ships session this afternoon, Christenson told attendees what the German shipbuilding company is doing to help decarbonise the maritime sector, with a focus on two projects.

“The goal of our two projected, called RiverCell and Pa-X-ell, is on one hand to make fuel cells sea-worthy, but to also make use of the novel possibilities that fuel cells offer,” he said.

Referring to his earlier point about public pressure for the decarbonisation of ships, Christenson explained to the audience that the focus on passenger ships from the general public is due to passenger ships being more in the public eye.

He then went on to discuss the advantage of fuel cells for passenger ships. “Fuel cells are a lot less noisy that a diesel engine and the emissions and are lot less. Based on this fact, a fuel cell can be arranged on board a ship where the power is needed,” he said.

“Rather than having to put the noisy diesel engine away from the consumers (passengers on the boat) which is currently the case on passenger ships, the fuel cell can be located almost anywhere.”

Next to take to the stage was Laurence Grand-Clement, Founder and CEO of Persee. Founded in 2013, Persee combines deep hydrogen knowledge together with digital mastery and positions itself as the operational decision specialist for hydrogen projects and infrastructure.

Leveraging a unique mathematical representation of the hydrogen economy and comprehensive data bases, the company delivers innovative digital solutions targeted at every step of a hydrogen project

“Good afternoon everyone. I am going to focus on two projects, one is Maranda the other one is Flagships,” she said. “They are two fch ju funded projects.”

“We are really getting into another era where hydrogen and fuel cells are taking a share of the propulsion of a ship.”

Within her presentation, Grand-Clement referenced the Energy Observer which set sail in 2017. A reconditioned former 30.5 metre legendary racing catamaran, Energy Observer is now a veritable experimental platform for future energies.

Moving away from vessels that are already in action, to those that are still waiting to be completed, Grand-Clement talked about some of the hydrogen-powered ships that have be delayed.

“There is no one shipping segment that is dominant,” she told the audience. “Everybody is trying to do something with hydrogen and fuel cells independently within this sector.”

Last to take to the stage as part of the Ships session was Dr. Ulrich Bunger, who talked about inland shipping beyond diesel.