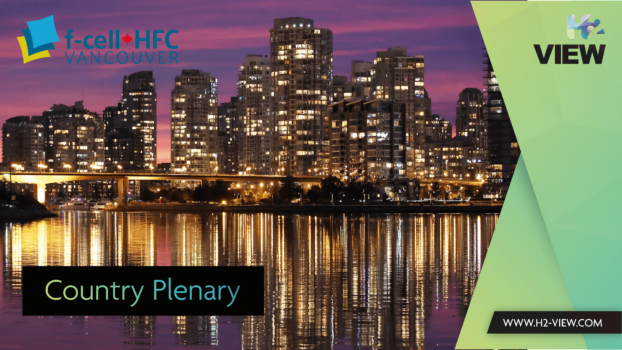 Australia’s suitability for hydrogen developments, the Korean hydrogen economy and Germany’s National Hydrogen Strategy were all key topics of discussion in the f-cell+HFC Country Plenary this afternoon.

Chaired by Dr. David Hart, Director of E4Tech, the session travelled across continents to discover how each region is working to advance their existing hydrogen economies, whilst building upon them.

First to take to the virtual stage was Leigh Kennedy from the Australian Trade and Investment Committee (Austrade). Within his session he talked about why Australia is the perfect match for hydrogen, its growing industry, government support and the opportunities in the country.

“Australia provides a safe and low-risk environment to invest and do business. One of the fantastic opportunities we have here is leveraging our existing infrastructures and industries, and we can do that with the help of the Australian Hydrogen Council.”

“In Australia it is a little different to other markets because we don’t have a huge domestic demand as of yet, and are therefore sort of in-between. We want to become a partner of choice for export, but we also want to decarbonise our own industries.”

“However, one of our key visions is that  to be one of the top three exports in the Asian market, providing jobs and being present in the global industry. That is a major ambition.”

“There is a lot of hydrogen-focused work that is going on behind the scenes and there are a lot of international partnerships working behind the scenes. Many companies are working hard to develop big projects, and it is fantastic to see those companies enter into the hydrogen space.”

Korea’s growing hydrogen economy was next on the agenda as Yeogwang Yoon from H2Korea discussed the country’s current projects and its ambitions for future developments, as it strives to lower its greenhouse gas emissions.

The South Korean Government sees hydrogen as a new engine for economic growth and central to the country’s shift to a low-carbon economy in the long-term. President Moon Jae-in announced his government’s determination to build a hydrogen economy in 2019, built on a roadmap which would see the country produce 6.2 million units of fuel cell electric vehicles (FCEVs) and build 1,200 refuelling stations by 2040.

Speaking about how Korea aims to achieve its ambitious goals, not just in the fuel cell electric vehicle market, but also in the wide hydrogen industry, Yoon showcased the three dedicated agencies in Korea that are currently pioneering a hydrogen economy:

The German Hydrogen Strategy took centre stage for the remainder of the Country Plenary. Kurt-Christoph Von Knobelsdorff, Managing Director of National Organisation Hydrogen and Fuel Cell Technology (NOW) GmbH gave attendees details of each of the 38 measures that cover climate change, research and innovation, economic and regulatory frameworks as well as international cooperation.

Knobelsdorff also emphasised another main focus for the strategy which is to decarbonise the industry sector. The strategy explains the country’s goals to substitute existing industrial usage for grey hydrogen to enable decarbonisation of industrial processes such as steel production.

“This is a very ambitious goal and is therefore one of the main focuses for the strategy. I believe that most of the money in the programmes will go towards achieving this goal.”

f-cell+HFC: Huge acceleration of interest in hydrogen technologies in past decade