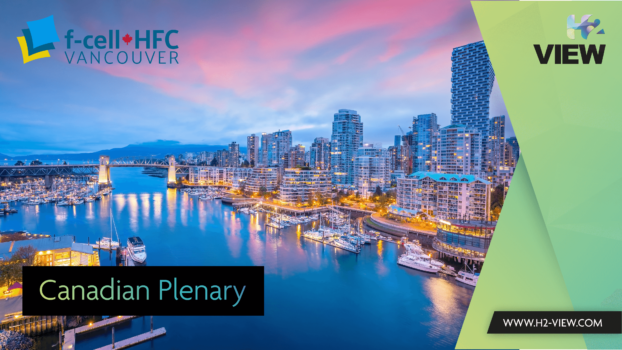 Robert Artibise, Chairman of the Board and the Canadian Hydrogen and Fuel Cell Association (CHFCA) and Chair of the Canadian Plenary session welcomed attendees before sharing a message from Jonathan Wilkinson, Minister of Environment and Climate Change: “Welcome everybody. I want to bring greeting for your virtual conference that’s happening to talk about hydrogen and fuel cells in Canada and around the world. It’s certainly an important topic.”

“Hydrogen is certainly part of the pathway that we need to follow to achieve our climate targets. It’s part of what we need to do to ensure that we actually grow an economy which is going to generate prosperity for Canadians as we go forward.”

Artibise then handed over to Joy Romero, Vice-President of Technology & Innovation atCanadian Natural Resources Limited, who talked about paving the way for a greener energy future.

In her presentation, she talked about blue hydrogen and three of Canada’s operating facilities: Horizon Oil Sands facility, where CO2 is captured from the hydrogen plant and is sequestered; Quest, geological storage which Canadian Natural Resources Limited is a 70% owner in; and North West Redwater (NWR), which is used for past oil recovery.

“We produce hydrogen from these and the CO2 captured is used for something,” Romero said.

“Countries like Norway, the UK and others around the world, what they are doing is talking about what they are going to build. What I am sharing with you is what we have already built and had operating beneath our wings for several years in some cases.”

“That knowledge within Canada on how do this safely in which the results from all of these areas are both track and shared openly within the scientific community, and is what also is being used to design other operations around the globe. So we are sharing what we know as a country with others to allow them to be able to develop their hydrogen economies as well. I don’t think people realise just how far advanced we are and that these are things that are in essence already in place.”

“What the difference is of course is the blue hydrogen that is being produced is being used for our own use but it’s still all the same building blocks. Hydrogen can just as easily be used in fuel cells or for homes or in transport.”

Up next, delegates will hear from Professor Alexjandro Adem, of Natural Saciences and Engineering Research Council of Canada, and Ballard Power Systems’ Dr. Kevin Colbow.