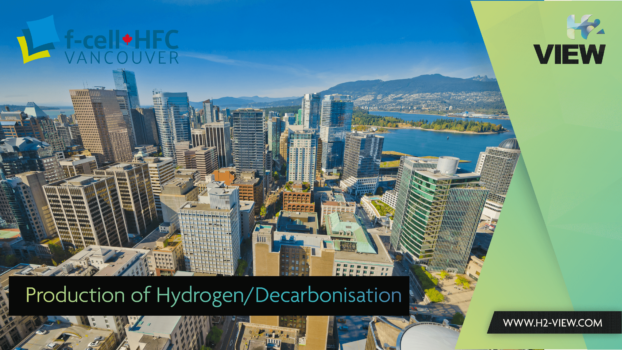 f-cell+HFC: Scaling up to reduce costs and increase volumes

Hydrogen continues to take centre stage at the f-cell+HFC 2020 virtual event, as attendees are now participating in the second half of day one.

Production of hydrogen/decarbonisation was a focus of one of the afternoon sessions which was chaired by Aaron Hoskin from Natural Resources Canada. “We have a very strong session today and a pretty packed agenda,” he said welcoming attendees.

First up on the virtual stage was Bertrand Masselot, President and CEO of Air Liquide Canada, who shared exactly what the industrial gas giant is up to in the hydrogen sector and how it plans to execute its ambitions plans for a decarbonised future.

Present in Canada since 1911, Air Liquide has built up a very respectable reputation both in Canada and across the globe as it holds a vast experience in hydrogen production and is currently emersed in a variety of hydrogen markets.

“Hydrogen is not new for Air Liquide,” he said. “We have been producing hydrogen for the past fifty or so years. Hydrogen is a very interesting fuel for the industry, it is widely adopted and is incredibly important.”

As many H2 View readers will already know, Air Liquide is very present in the hydrogen mobility market. The company already boasts a global reach of hydrogen stations and is delivering the zero-emission fuel to a variety of transport solutions.

“The example of hydrogen mobility is probably one of the best to illustrate what we are doing in this field. We are already mastering the hydrogen fuel value chain and we want to bring our customers a safe solution.”

With a focus on Air Liquide’s North American hydrogen efforts, Masselot spoke in depth about two of the company’s major hydrogen projects. One located in Bécancour and the other located in Nevada.

“I am going to focus on two ongoing projects, where we are step-by-step building a network of green hydrogen sources,” Masselot told the audience.

“In Nevada, we are using our own biomethane, and we will inject biomethane in reforming to produce hydrogen. We will liquefy it as well and then ultimately we will bring this green hydrogen to a variety of applications, such as transport.”

The Nevada project is a $150m investment for the company which will see the production of 30 tonnes of liquid hydrogen per day, providing a reliable supply of hydrogen to the West Coast by 2022.

“Our next project that I would like to present to you is Bécancour. So, what are we doing in Bécancour? Well, we decided in early 2019 to investing in an existing hydrogen site.”

As part of the project, the company is making a $40m investment for new electrolysers which will double the current capacity of the site. The additional investment will allow the sight to produce eight tonnes of 100% green hydrogen per day.

“Scaling up hydrogen technology and overall supply chain will deliver competitive low-carbon solutions across a wide range of applications by 2030. To reach this milestone, there is a need for investment, policy alignment and demand creation,” Masselot enthused.

Next on the Vancouver stage was Cyril Dufau-Sansot from Hy2Gen Canada whose presentation was titled: Producing and deploying 100% carbon free green hydrogen in greater Montreal.

As part of his presentation at the f-cell+HFC event, Dufau-Sansot spoke about the joint venture that Hy2Gen formed with Greenfield last year, which will see the production of green methanol and hydrogen at facilities in Varennes, Canada.

Following Dufau-Sansot was Chris Reid from Innovative Breakthrough Energy Technologies. Reid gave a very technical talk on how to produce low cost, decarbonised hydrogen, with a focus on a Tri-Generation Pyrolysis solution for blue hydrogen production.

Rounding up the session was Mike McKensey from Macquarie Capital Group in Australia, a global financial service group, which through its Green Investment Group, is the world’s largest developer of renewable assets.

“Green hydrogen is very complimentary to our core themes of infrastructure, energy markets and renewables. With regard to our activities in British Columbia, we have actually partnered to progress a large-scale hydrogen injection project in the north east of the province.”

“The thing we like about BC is the amount of gas flowing through British Columbia. You can easily set up a project that injects small amounts of gas, but it is still a very significant project in terms of hydrogen size.”

“We think that British Columbia is fantastic. It has amazing attributes that are very unique. I think for the province, it needs to realise the potential here and we think you need to build scale quickly to drive those costs down, but once you obtain that leadership position it puts you in an amazing position for the emerging opportunity.”

f-cell+HFC: Huge acceleration of interest in hydrogen technologies in past decade