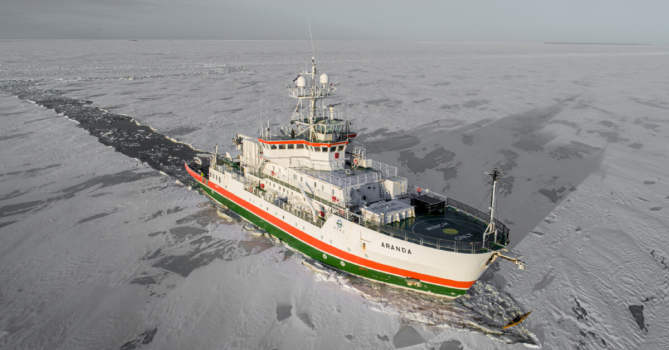 Fuel cell technology to be tested on SKYE research vessel

Fuel cell technology will be tested on a Finnish Environment Institute (SKYE) research vessel operating in the Baltic Sea this summer.

The experiment will use a fuel cell system fuelled by excess hydrogen from chemical industry group Kemira’s Äetsä plant in a pilot project coordinated by the VTT Technical Research Centre of Finland.

“[SKYE’s research vessel] Aranda is powered by two diesel engines, and their vibration and emissions cause interference in measurements and sample collection carried out aboard the research vessel,” said Valtteri Pulkkinen from VTT.

“The fuel cell system enables the diesel engines to be shut down during short-term measurements. At the same time, local emissions of carbon dioxide and particulates can be eliminated.”

“At the moment, testing of a similar system is ongoing at Kemira’s Äetsä plant.”

“This fuel cell solution is a good and environmentally friendly option for using excess hydrogen.”

“It is a rewarding project, as it promotes Baltic Sea protection, energy efficiency and zero emissions, as well as cooperation between different organisations.”

This decision calls for significant actions from shipping companies, as large cargo vessels use low-quality fuel oil, which is difficult to replace with renewable fuels.

Modern vessels are needed, and fast. Luckily, the development of alternative technologies, like fuel cell technology, is making good progress.