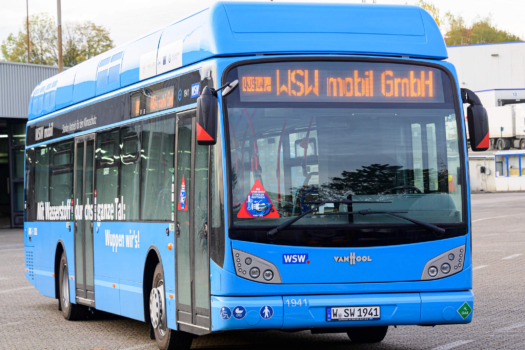 As part of what is thought to be the largest ever order for hydrogen-powered buses in Europe, the German city of Wuppertal will soon put the final instalment of vehicles on the road.

Back in 2018, Wuppertal joined forces with the nearby city of Cologne to order 40 modern buses powered by hydrogen fuel cells from Belgian manufacturer Van Hool NV.

Regionalverkehr Köln GmbH (RVK) is already running 30 of the hydrogen buses, and Wuppertal Stadtwerke (WSW) will soon put the remaining 10 on the road, according to Andreas Meyer, Head of Technik Bus for WSW mobil GmbH.

“The launch of our hydrogen bus fleet is a major milestone. We see it as the beginning of a large-scale adoption of hydrogen technology – not just for WSW, but in Germany, across Europe and around the world,” said Meyer.

“Commercial vehicles like buses will deliver the business case that hydrogen can power many forms of transit, travel and transport safely and cost effectively – first commercially, and in the coming years, privately.”

Worthington Industries is supplying the onboard hydrogen fuelling system equipped with high-pressure composite cylinders for the zero emission buses.  The cylinders store enough compressed hydrogen so that each vehicle has a range of up to 350km.

Each bus is fitted with a roof mounted frame holding five 3-meter-long light weight composite cylinders, which consist of a seamless aluminium alloy liner, fully overwrapped with high-performance fibres in an epoxy resin matrix. Together these cylinders can hold up 38kg of hydrogen gas at 350 bar working pressure.

“Buses and heavy-duty trucks are the vanguard market for hydrogen vehicles and will pave the way for adoption of the technology in the passenger vehicle market down the road,” said Radiša Nunić, Worthington’s Director European Sales – Alternative Fuels I Heavy-Duty Vehicles and Gas Transport Solutions.

“Therefore, Worthington is expanding its production capacity for onboard fuelling systems in Europe. A new state of the art composite cylinder production facility will open in Austria this summer to supplement the output of our existing plant in Poland.”

On top of the new hydrogen buses, Wuppertal is also building hydrogen refuelling stations to support the vehicles. The city is hoping the switch will help it save nearly 700 tonnes of carbon dioxide.