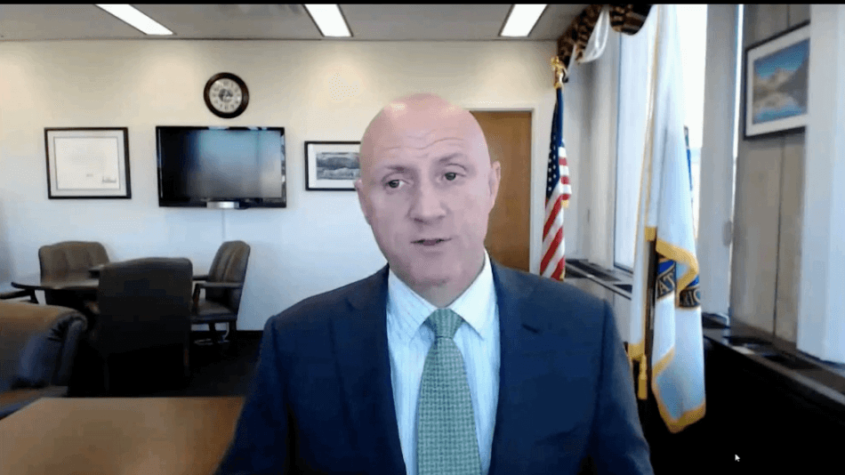 “Hydrogen is great and we are very excited about it, but I don’t think we’re going to realise its potential without real collaborative efforts,” Daniel Simmons, Assistant Secretary of Energy Efficiency and Renewable Energy at the US Department of Energy (DOE) told Green Hydrogen Visions for the West Conference attendees today (17th Nov).

The first keynote of the day, Simmons discussed the departments hydrogen and fuel cell efforts, including its Hydrogen Program Plan it launched last week to provide a strategic framework for its hydrogen research, development and demonstration (RD&D) activities.

Addressing the audience, Simmons asked the question, why hydrogen? Answering his own question, he stated, “We are very excited about hydrogen and we believe that hydrogen has a lot of potential in terms of transportation, as well as in the electricity sector, and it’s an opportunity to bring all of these things together, but we have a lot of work to do.”

“We believe that hydrogen can add value to industrial and energy sectors, it can broaden technology choices for medium- and heavy-duty transportation, but to full recognise hydrogen’s potential across the economy, we need to see significant increases of hydrogen supply and demand as well as significant cost decreases.”

Explaining how the DOE hopes to help recognise hydrogen’s potential in the economy, Simmons then went on to introduce the DOE’s hydrogen and fuel cell technology office, [email protected]

“This is really about two ideas. One, integrating different sectors that could use and benefit from hydrogen, and number two, growing the volume of hydrogen used, to reduce costs. The value of scale is so great, how can we increase the scale to drive down costs.”

“Earlier this year DOE announced 18 new projects, totalling $64m in support of our [email protected] vision of affordable hydrogen production, distribution and use. Applications for this include data centres, steeling manufacturing and medium- and heavy-duty trucking,” Simmons said.

Simmons then went on to tell the audience about some of the demonstration projects that DOE currently has underway in Utah, Texas, Florida, California, Ohio, among other states. He also discussed the two consortia launched by DOE on National Hydrogen and Fuel Cell Day, to advance fuel cell truck and electrolyser research and development.

Moving away from the mobility sector, Simmons told the audience that there is also a lot of interest in hydrogen across the whole of DOE. “While we focus on green hydrogen, a lot of focus obviously on electrolysers, we’re collaborating with the Office of Fossil Energy on carbon capture utilisation and storage. We’re also collaborating on key areas such as hydrogen pipelines, reversable fuel cells and large-scale hydrogen storage.”

“We recently kicked off four projects in collaboration with our Office of Nuclear Energy. Two of these projects are looking at the potential of integrating megawatt level electrolysers at nuclear plants and using high temperature heat to produce hydrogen.”

“Two others will advance the flexible operation of light-water reactors with integrated hydrogen production systems. The results from these exciting projects will help us understand how nuclear hydrogen production operations can help nuclear plants diversify and increase their profitability by switching between electricity production and hydrogen generation.”

Simmons concluded, “The international interest of hydrogen has really picked up. At the DOE, we are proud of our collaboration and we recognise the need for strategic coordination, in order to manage projects successfully.”