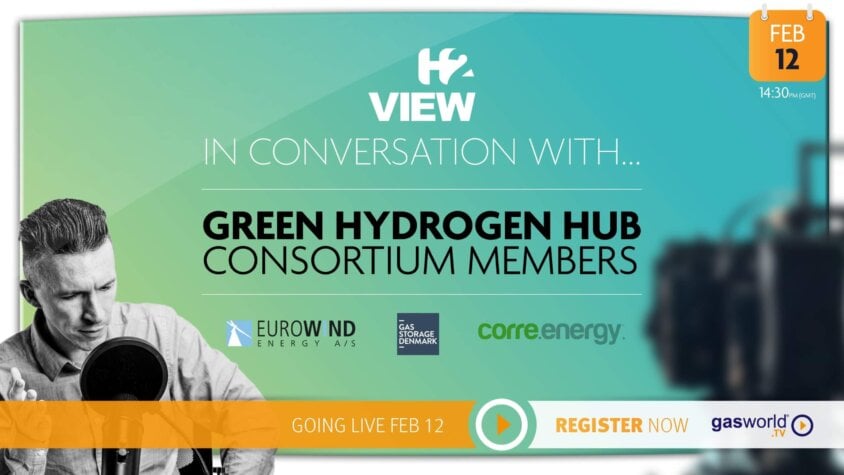 It could be one of the world’s largest green hydrogen production plants once operational and its main purpose will be to secure renewable energy irrespective of the weather.

The three partners are aiming to establish by 2025 a complete Power-to-X value chain including a 350MW electrolysis plant, 200,000MWh hydrogen storage and a number of industrial hydrogen consumers with a 320MW Compressed-Air-Energy-Storage (CAES) facility.

The final link of the value chain will be the Green Hydrogen Hub Denmark (GHH), which can re-convert the green hydrogen into electricity, improving thus the security of supply.

Located in the North of Denmark, between Hobro and Viborg, this innovative project will be combined with an underground hydrogen storage site.

With more than 30 years of collective renewables and storage development experience, Corre Energy is developing a pipeline of hydrogen-based storage projects.

H2 View’s Managing Editor Rob Cockerill asked Patrick McClughan, Chief Commercial Officer of Corre Energy, what is it about the consortium that’s so special, to recap what CAES is exactly and what benefits the collaboration will bring to the market.

“The compressed air energy storage, or CAES, aspect really plays a fundamental part of ensuring that industry players can benefit for the first time ever from the lowest cost, technically acceptable cost, of decarbonisation, decarbonising their industry,” Patrick McClughan, Chief Commercial Officer of Corre Energy told the webinar this afternoon.

He was responding to a question from H2 View’s Managing Editor Rob Cockerill around what CAES is and what’s so special about it.Further explaining, McClughan said, “We [Corre Energy] design, commercialise and develop systems predominantly in salt caverns and specifically using CAES and hydrogen-based systems.”

“I think the need for greater scale storage is really increasing at a rapid pace. It’s becoming more obvious to policy and to actual industry players and indeed, it’s recognised by the European Commission and various European governments as what is seen as a critical component of the future energy system, the new energy system.”

“CAES Itself provides a number of significant benefits for the deep integration of renewables.”

“If I may just to illustrate CAES itself, it really balances integration of large-scale renewables for the first time ever.”

“Renewables, yeah they are intermittent that we’ve heard this for a long time. Compressed air energy storage helps, of course, provides more than a bridge to towards mega scale decarbonisation, allowing industry to benefit from the lowest cost of decarbonisation through sector coupling and connecting with projects such as the Green Hydrogen Hub in Denmark.”

“You’ll see a lot of flexibility be created around renewables for the first time ever that we as developers have understood for many, many years.”

“We’ve been modelling the system, we’ve been developing projects and we’ve been working at a co-financing capacity with the European Union and the Commission for many, many years successfully to get us to this point where we see this very valuable consortium forming.”

If you missed today’s webinar or you want to watch it again, go to gasworld.tv