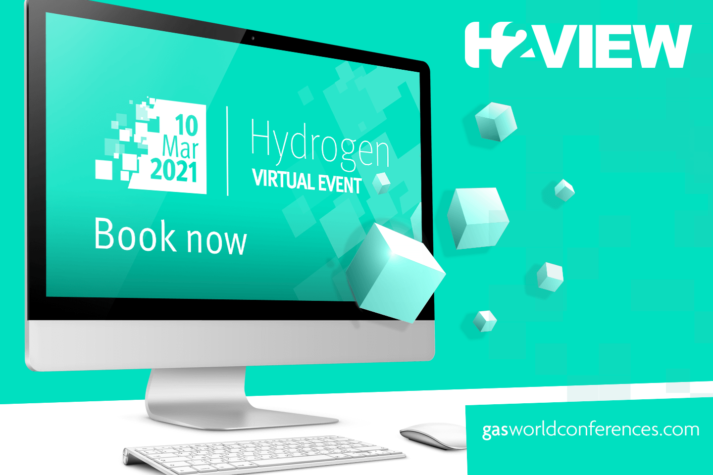 In an increasingly crowded events space that is the hydrogen sector, what makes an online forum for discussion and debate stand out? Try heavyweight names, even bigger topics, and cross-sector communication and networking opportunities.

That’s exactly what H2 View will attempt to deliver when it stages its Virtual Event this March and brings together a star-studded line-up of speakers and specialists in the field. Titled Realising Hydrogen’s Future Role – at Speed and Scale, the event recognises that the time is now for the hydrogen society, and now is the time to act.

Hydrogen has the potential to be the cornerstone of the clean energies transition and momentum gathers in this important space every day, as H2 View readers know better than anyone else. In fact, in an otherwise challenging 12 months across the world, the reinforced belief and vigour in hydrogen markets has afforded a sense of optimism in our challenge to achieve sustainability. The private and public sectors are emboldened alike; governments the world over continue to unveil funding and support for hydrogen infrastructure; and strategies are increasingly rolled out.

The challenge now lies in cost-competitiveness, deployment at speed and scale, and enlightening public perception. To realise the vision of a future society underpinned by green hydrogen, companies across the value chain will need to step up their efforts in hydrogen production, infrastructure roll-out and end-user adoption.

Powered by H2 View, the Virtual Hydrogen Summit 2021 is dedicated to addressing these many-splintered topics within the growing hydrogen economy. The Summit’s progressive agenda will deliver the experts and insights to drive debate and provide key takeaways to help companies strategise their future role in the clean energy sector. And that roll-call of expert speakers is as esteemed, progressive and engaging as can be.

Getting proceedings underway on 10th March will be Daryl Wilson, Executive Director of the Hydrogen Council.

A highly respected business leader with decades of international experience, Wilson joined the Council in October (2020) with an impressive track record of building successful organisations and operating at the intersection of environmental and sustainability issues across sectors. He was most recently the global CEO of Hydrogenics, a fuel cell and electrolysis technologies provider with manufacturing sites in Germany, Belgium and Canada and service centres in Asia, Europe and North America.

Prior to Hydrogenics, Wilson held a variety of roles in environmental technology, operations, manufacturing, human resources, product development, and organisational change at companies including Toyota and Dofasco. As the new and first ever Executive Director of the organisation, Wilson will lead the Council through the next stage of its growth, especially as it engages more with governments, industry, and the investor community around the world to scale up hydrogen and build a more resilient and sustainable post-Covid economy.

At the Summit he will provide the official Opening Keynote speech and reflect on progress made and the challenges ahead in the hydrogen (energy) sector.

Following this unrivalled keynote, Session 1 of the event will discuss Hydrogen’s Future Role and explore both the opportunities for growth in Europe courtesy of the FCH JU’s Bart Biebuyck, and the role of green hydrogen as the key enabler in deep decarbonisation thanks to a joint talk from Cummins’ Denis Thomas and Bruno Forget.

A particularly technology-intensive Session 2 will focus on Scaling Up & Meeting Demand, with talks from Linde, Hydrogenious LOHC Technologies and PDC Machines, while the final two sessions of the day will turn attentions to those projects, players and technologies that are already Proving the Future is Possible.

Confirmed as sponsors for the inaugural H2 View virtual event are:

Proving the future is possible

Part 1 of this forum will include insights from Nel ASA CEO Jon André Løkke. With 10 years’ experience from the REC Group, including positions as senior vice-president in REC Wafer, investor relations officer in REC ASA and CFO in REC ASA, prior to his appointment as Nel ASA CEO in January 2016, Løkke has a depth of experience to bring the table in both renewables and hydrogen in particular. Løkke has also worked for the ABB Group and holds an International MBA degree from Glasgow University and a Bachelors degree in business and economics from Southampton University.

At the Summit he will draw upon all of this knowledge, as well as the rich history and leading position that Nel occupies in the field of electrolysis, with a talk titled Green Hydrogen: Delivering the Key Enabler with Electrolysers at Scale.

At the other end of the scale, the session will also see audiences learn more about Nilsson Energy, an enterprising and groundbreaking player in the renewable energy space and microgrids which may not have quite the rich history of companies like Nel, but is certainly just as innovative and intrepid. Martina Wettin, Partner and Market/PR Director of Nilsson Energy will describe the incredible story of the company so far, why actions speak louder than words how passion can be turned into practicality in off-grid, emission-free renewable energy.

Part 2 of proving the future will include talks from Ballard Power Systems and ZeroAvia, no less, as the emphasis moves to proof of concept and momentum in mobility. Randy MacEwan, CEO of Ballard, will reflect on the company’s Milestones in Mobility: Proving Power Capabilities, while ZeroAvia Founder and CEO Dr. Val Mifhtakov will share the company’s innovative story and explain why Aviation and a Hydrogen-Fuelled Future are ready for take-off.

In addition to its star-studded agenda, the event will also provide invaluable virtual networking opportunities in this exciting and ever-growing new space for suppliers, innovators, technologists and end-users.

The event will take place on 10th February and will also remain in legacy for one week thereafter for all delegates and sponsors keen to maximise the on-demand opportunities of all of the day’s conference proceedings.

Confirmed exhibitors for the event include: