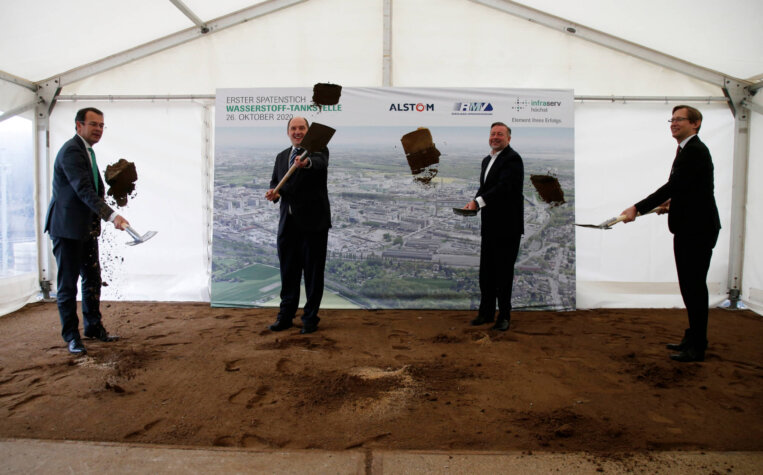 State Secretary Jens Deutschendorf on Monday (26th Oct) gave the starting signal for construction to begin on the first hydrogen station for trains in Hesse, Germany.

A groundbreaking ceremony was held with Deutschendorf, State Secretary of the Hessian Ministry of Economics, Energy, Transport and Housing, RMV, Alstom and Infraserv Höchst to develop hydrogen infrastructure in the Rhine-Main region.

Expected to be operational from December 2022, it will be the second hydrogen station for trains worldwide, with the first currently under construction in Bremervörde, Lower Saxony.

The station, located at Industriepark Höchst, will fuel 27 of Alstom’s hydrogen-powered Coradia iLint’s, which will be supplied to RMV.

Infraserv Höchst, the operator of the industrial park where the station is being built, will construct and operate the filling station.

“With Alstom’s fuel cell trains, we are opening up a new chapter of emission-free mobility at RMV,” said RMV’s Managing Director Knut Ringat at the groundbreaking ceremony.

“With the 27 vehicles, we are setting a world record: nowhere else is there such a large fuel cell fleet in local public transport.”

With a range of up to 1,000km a day, the Coradia iLint’s will replace the diesel-powered locomotives ordered by RMV’s subsidiary fahma on the lines RB 11 (Frankfurt-Höchst – Bad Soden), RB12 (Frankfurt-Königstein), RB15 (Frankfurt – Bad Homburg – Brandoberndorf) and RB16 (Friedrichsdorf – Friedberg).