Network operator HTEC is working hard to drive down the cost of hydrogen in British Columbia and confirmed to H2 View its retail stations in the Canadian province are currently retailing at CAD$12.75 ($10.15) per kilogram.

CEO Colin Armstrong attributed this to the work HTEC is doing with governments on policies and programmes so hydrogen can be priced competitively with gasoline and diesel.

“We know we must get it down further for heavy-duty and transit operations; the higher volumes associated with these applications will help,” he told H2 View.

HTEC currently operates four stations in British Columbia, which has the largest hydrogen fuelling network in Canada, in Vancouver, Burnaby, North Vancouver and Vancouver Island. The Canadian firm has plans for five more stations that will be open in the next one to two years.

“A key focus is on building a station network in Quebec like we are doing here in British Columbia,” Armstrong said. “We operate a backup station in Quebec City and have begun the development of a station in Montreal and another in Quebec City, with plans to add another two stations to the network in the next two to three years. We are also building a temporary station in Alberta to support AZETEC project, a heavy-duty hydrogen fuel cell truck demonstration.”

HTEC’s plans were backed by a $20m investment from Chart Industries in December 2020, which acquired a 15% stake in the station developer.

“With their backing, we can move faster and with a greater ability to meet growing market demand for hydrogen production, distribution and fuelling station solutions,” Armstrong said.

“Chart’s investment helps us build engineering and operations capacity; opens opportunities to expand our technology and infrastructure offerings into new jurisdictions; allows us to utilise Chart’s broad hydrogen equipment and liquefaction offerings; and ultimately, strengthens our position and brand in the market.”

He continued, “Strategic collaborations have been an important part of HTEC’s evolution. Chart really understands the critical role hydrogen plays in the creation of more sustainable energy systems.” 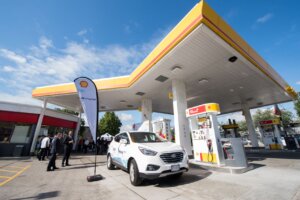 HTEC will continue to build out its station network to support the ever-increasing number of hydrogen vehicles being purchased and leased by Canadian fleet operators and consumers.

“An important cornerstone of HTEC’s strategy is to facilitate the inclusion of hydrogen in government policies driving forward the global clean energy transition,” Armstrong said.

“Canada’s National Strategy estimates that hydrogen will deliver up to 30% of the country’s end-use energy by 2050. The government is committed to supporting the adoption of hydrogen domestically in all forms of mobility – to meet our carbon reduction goals and demonstrate the potential of hydrogen so the export of hydrogen and hydrogen technology becomes more likely.”

Armstrong said government policies and support are “critical” in fuelling the drive to hydrogen.

“Federal and provincial policies that articulate firm timelines around transportation emissions reductions are fundamentally important, as are policies and activities around carbon pricing and carbon credits. Here in British Columbia, where HTEC is headquartered, the CleanBC Plan outlines that by 2040, 100% of new light-duty passenger vehicles sold must be zero emission vehicles (ZEVs). As part of this move to ZEVs, the province is investing significantly in new clean energy infrastructure, including hydrogen fuelling stations, to make it easier for British Columbians to choose zero-emission transportation options,” he explained.

“Governments can also move the needle by adding hydrogen-fuelled vehicles to their zero emission fleets, and by incentivising and supporting early adopters of hydrogen-powered mobility alternatives.”

He added, “The reality is, it will take a number of solutions to reduce carbon emissions, and the automotive OEMs consistently talk about the need to offer consumers multiple alternative fuel powertrain alternatives to enable this to happen. Hydrogen electric vehicles will meet some consumers’ needs and expectations perfectly.”