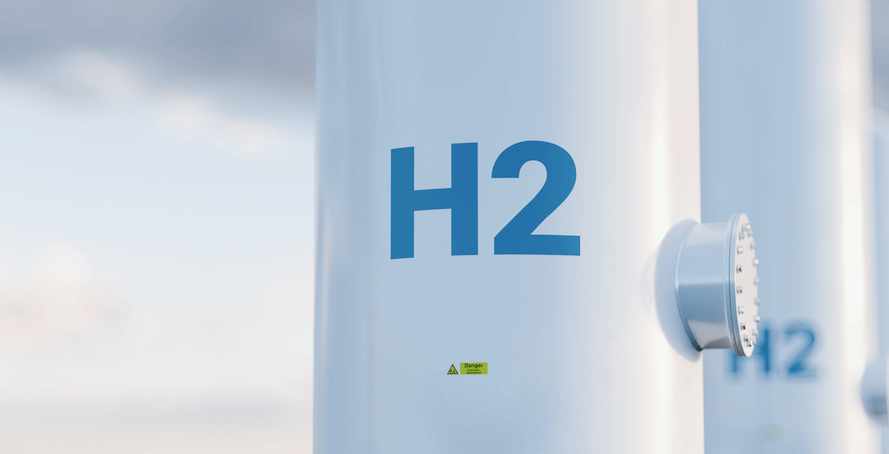 Hydrogen, Commercial Now – Not all eggs are in the hydrogen basket

As we stated at the start of this four-part series, hydrogen is not always the best answer. In this final instalment we take a look at the use cases where hydrogen will be the most competitive way to decarbonise but coming at a cost, as well as looking at some scenarios where the dominant answer won’t be hydrogen.

We will again use Exhibit 5 from the Hydrogen Council’s report “Path to Hydrogen Competitiveness” (see Figure 1 below) to visualise these scenarios and consider some examples. Here we are looking at the two left quadrants on the chart, the bright blue and grey hexes in colour. 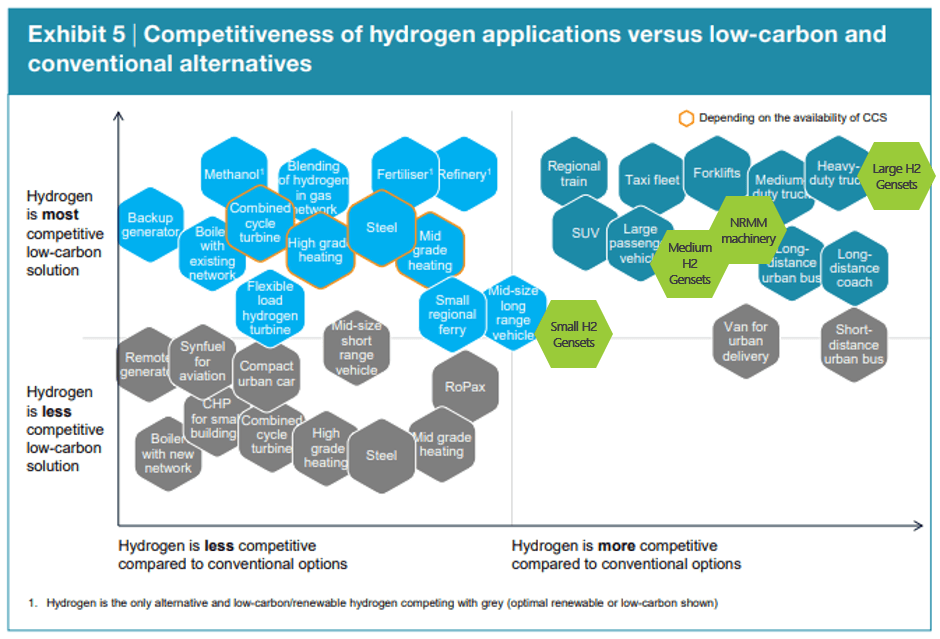 Hydrogen, the most competitive low-carbon solution coming at a cost

These use cases all have something in common, they are no longer mobile, nor off-grid. As outlined in Part 1 there are three factors driving hydrogen viability, namely: the Level of Asset Utilisation, the Volume of Energy required, and a requirement for Mobility or Off-grid (see Figure 2). Looking at all the use-cases in the top left quadrant we notice that they are applications which require a very high Volume of Energy (e.g. ‘High Grade Heating’), in some cases need to retain that energy for long periods of time (e.g. ‘Backup Generators’), or have duty cycles that can be considered higher in terms of Asset Utilisation (e.g. ‘Small Regional Ferry’). In some cases the required energy levels, or put differently volumes of fuel, will be so great that they are unlikely to be practically met by other fuel sources such as bio-fuels or synthetic fuels. 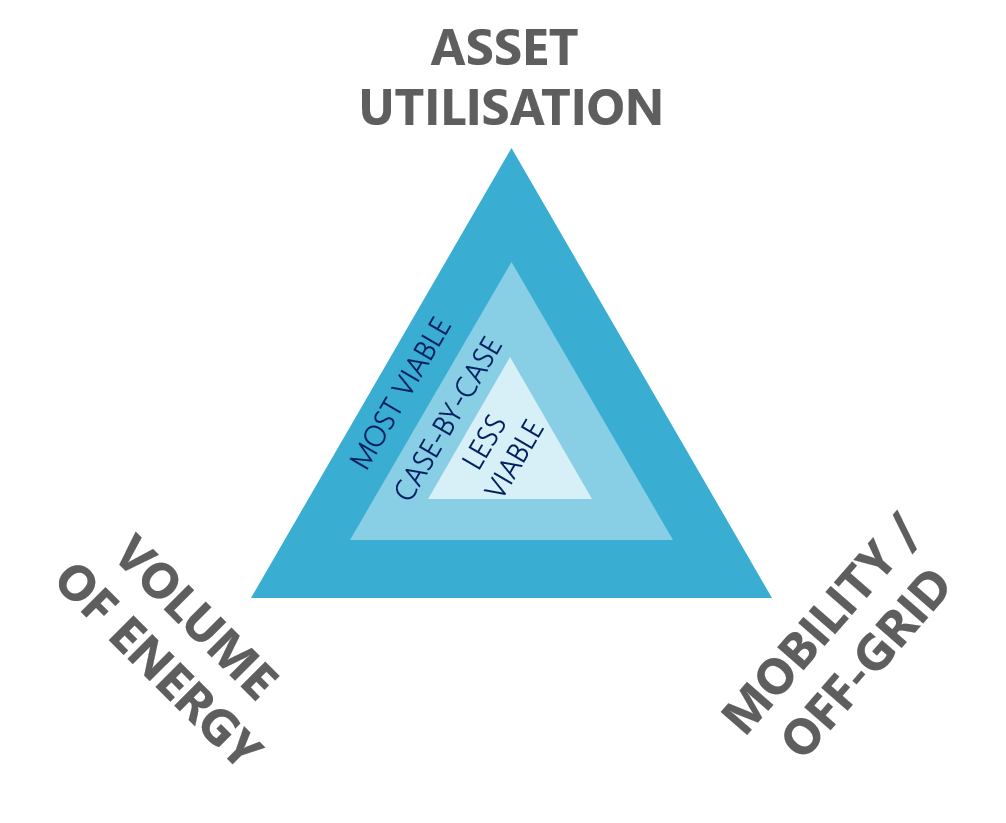 The role of the gas grid

A prime example of this is decarbonising the gas grid. The volume of energy transported by the gas grid and transport fuels is so significantly higher than what the electricity grid transports. It is a point very clearly visualised by the University of Birmingham and the Birmingham Energy Institute in Figure 3 below. Comparing the energy carried via the gas grid (blue line in Figure 3) and the energy carried via the electrical grid (the red line in Figure 3) it is easy to see the scale of the increase needed to electrify heating. When you then consider adding the load from transport (the grey line) onto the load from the gas network we would need the electricity transmission grid to carry 4x the load it does today. That is a large ask of a transmission system that already can’t carry all the renewable wind produced in the North of the UK down to the majority of the demand in the South.

So without monumental upgrades to the electricity transmission grid (which will take a significant period of time and cost) there is no way we will shift all the required use cases to direct grid connections or batteries charged from grid connections. We must use the existing gas transmission assets to carry hydrogen for use in homes, as a transport fuel and as a distribution system for off-grid fuels. We must use hydrogen and the gas grid as an energy carrier for renewably produced electricity.

Indeed, hydrogen is the current favoured and predicted option is to decarbonise the gas grid and much of heavy transport use. In heating it would see a move back to blending in renewably produced hydrogen (back towards ‘Town Gas’ which ended in 1987) and then on to a complete switch to a pure hydrogen grid. 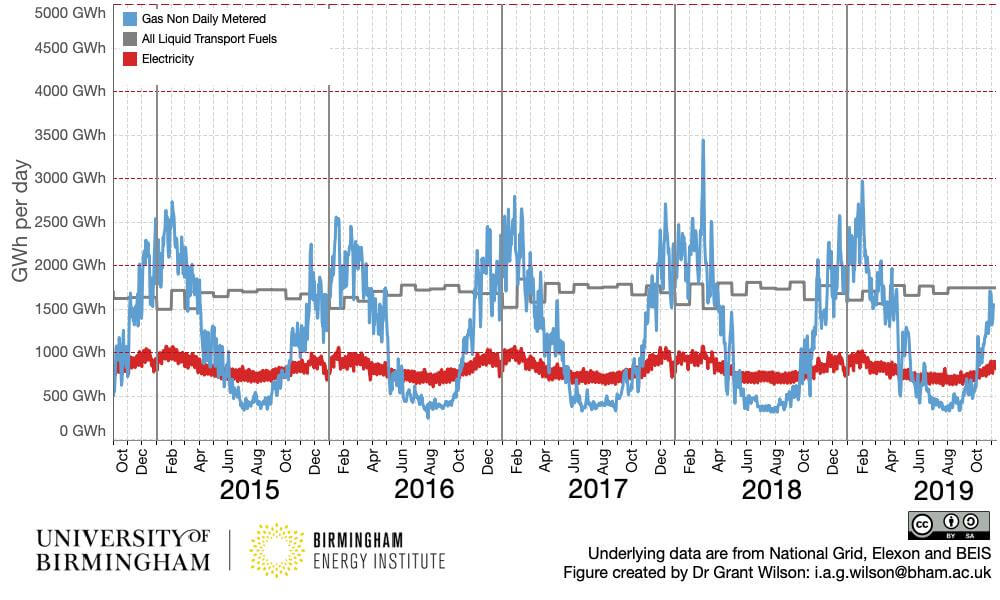 Hydrogen as a feedstock

Additionally, many of the applications in this quadrant are where hydrogen is needed, or can be used as, a feedstock to a chemical or manufacturing process, such as in fertiliser production or in steel manufacturing (at the in iron ore reduction stage). For some of these applications today, hydrogen is being cracked from fossil fuel hydrocarbons. In these cases renewably produced hydrogen becomes a straight switch for the fossil fuel hydrogen. In other cases, such as in steel manufacturing, changes will be needed in the chemical processes so that hydrogen can replace the existing reaction agent.

Where hydrogen isn’t the best answer

There are many applications where hydrogen is not the most competitive answer. Yes, it can be an answer, and no doubt we will see hydrogen solutions in these areas, but other low-carbon solutions will be more prevalent. And that is OK, we don’t need hydrogen to be the answer to all things – that is missing the point. We must decarbonise, and it will require many different approaches. We should focus on using the most reasonable solution and focus on doing it quicker, not perfectly.

These use cases are depicted in the bottom left quadrant of Exhibit 5 (Figure 1), an area where all three of the driving factors may be present, but they are not represented to a high degree or may not all be present in one use case. Here the most common decarbonisation solutions will be direct electrification and energy storage through the use of batteries or super capacitors.

Where a grid connection is possible and a moderate amount of energy is needed, for example for ‘Combined Heat and Power for small buildings’ direct electrification will be best. Where mobility or off-grid capability is required and asset utilisation and volumes of energy required are low, it allows for less energy dense storage and the ability to recharge. In use cases such as the ‘small urban car’ or very small generators (<4kW generators) batteries or super-capacitors will be most prevalent.

Over this four part series we have seen how for some use cases hydrogen is the best answer, while for others we shouldn’t expect to see it in great prevalence for a while, possibly ever. This doesn’t meant there won’t be particular scenarios where the rule is broken and we see hydrogen in the lower left quadrant and batteries in the top right, some situations will require more detailed analysis and different answers than the generalised. But what is clear is that hydrogen has a prominent and crucial role to play in decarbonising our society. And it’s adoption must start now.

Message: Nothing in life is free, and right now we are paying on credit

Lastly, as the old mantra goes, nothing in life is free. So yes, the cost implication of a decision or pathway must be considered, but to many organisations ‘financial viability’ means cost parity or cheaper that current cost. But while we wait for these options to reach this desired cost parity we are just paying on credit. The environmental damage that is being done will have a future cost to every society and every supply chain.

The Hydrogen Council’s findings indicate that financially viable decarbonisation hinges on the ability to achieve significant carbon capture and storage (CCS). While this may be the case, I would argue that even if CCS cannot be achieved, we must decarbonise, and thus we may have to accept the higher cost of using electrolysis produced hydrogen. These costs will come down as scale increases, but waiting for the day when it is cheap enough will never come if we don’t start pushing demand.

Ultimately everything must be paid for. At the moment the environment has been picking up our tab. Our cheap processes, goods, products, cars, holidays, entertainment, you name it, have just been building up a debt, which is now being called in.