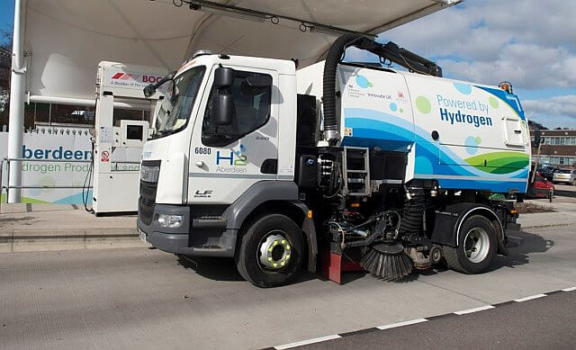 A two-year trial that involved eleven urban trucks and vans running of green hydrogen dual fuel has saved over fourteen tonnes of CO2.

The result is part of the Low Emission Freight and Logistics Trial (LEFT) project that is investigating the practical deployment of hydrogen powered vehicles in the UK.

As part of the trial, hydrogen fuel specialist ULEMCo converted four refuse trucks, a road sweeper, a patient transport vehicle, a refrigerated van and four panels vans to run on hydrogen as a dual fuel.

During the two-year period, nearly 60,000km were covered and 1619kgs of hydrogen were used.

“The LEFT trial was an excellent opportunity for us to show the diverse range of commercial vehicles that can be hydrogen enabled,” said Amanda Lyne, Managing Director of ULEMCo.

“This provides a route to reducing greenhouse gas emissions significantly across fleets of heavy use and heavy-duty vehicles without requiring the operators to make major changes to their usual operations.”

“A number of the partners including Aberdeen City Council are continuing to use the vehicles at locations where the hydrogen infrastructure is more reliable. All partners agreed that if this was available for them too, they would have continued to do the same,” Lyne continued.