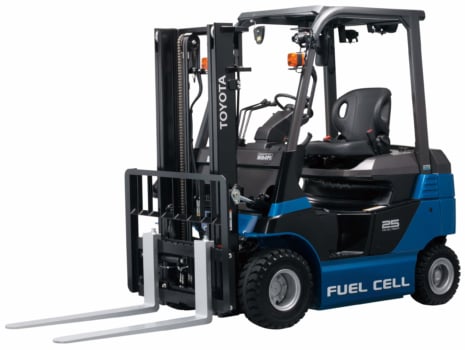 When it comes to material handling equipment or even automobiles and factories, hydrogen fuel cells have proven to be a realistic replacement for today’s conventional means of powering machinery and equipment, says Trinton Castetter, Product Marketing Specialist at Toyota Material Handling.

An ideal complement to the four-wheel version unveiled at Toyota’s last ProMat appearance in 2009, the three-wheel model continues Toyota’s promise to bring sustainable energy sources to the forefront of the material handling industry.

Here, Castetter gives some key insights into how fuel cells work and how they can ultimately impact businesses bottom lines.

Trinton Castetter (TC): Hydrogen is a chemical element that can be found in natural resources like plants and water.

While there is a finite amount of naturally-occurring hydrogen in the atmosphere, the element can be produced in alternative ways, including steam reforming, electrolysis, and gasification.

What is a fuel cell?

TC: A fuel cell is a cell that produces an electric current as a direct result of a chemical reaction.

The chemical reaction produces electricity that is used to power a load which, for our purposes, is a forklift.

Fuel cells are used to power a wide range of products today, from small electronics, to buses, and even certain industrial facilities.

How does a fuel cell forklift work?

Similar to a battery, PEM fuel cells utilise a cathode, anode, and an electrolyte to transfer electrons along an electrical path to power the forklift.

Unlike a lead acid battery, however, this process occurs using only hydrogen and oxygen found naturally in the atmosphere.

The electrolyte, in this case, is a membrane that allows only positively charged ions to pass to the cathode, leaving negatively charged electrons to power the forklift.

When the electrons, positively charged ions, and oxygen pulled in from the environment come together at the end of the circuit, it creates water as a byproduct that flows out of the fuel cell.

What are the advantages of fuel cells in material handling?

TC: Hydrogen-powered vehicles are similar to their IC engine counterparts in that they can be refilled quickly and easily at a fuelling station.

They also require less maintenance because they don’t need the watering, equalising, charging, or cleaning that is required with lead acid batteries.

While the bottom line is important to all businesses, it’s also important to consider the positive impact that fuel cells can have on the environment.

With zero carbon emissions and potentially less reliance on natural resources to produce, fuel cells are a viable source of sustainable energy capable of powering more than just forklifts for the foreseeable future.