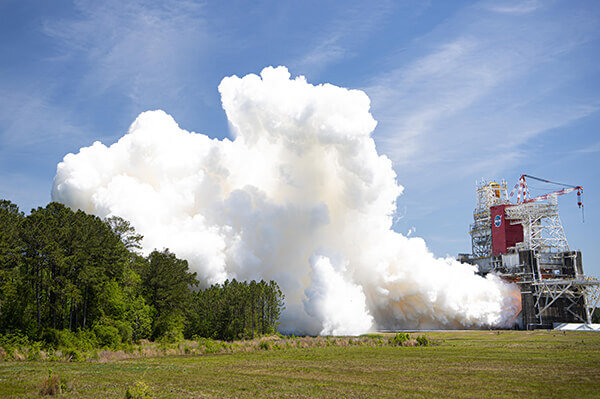 Aerojet Rocketdyne’s hydrogen-fuelled rocket engine, the RS-68A, has completed its final hot-fire acceptance test for use on the United Launch Alliance (ULA) Delta IV Heavy launch vehicle on the B-1 Test Stand at NASA’s Stennis Space Centre in Mississippi.

Thought to be the world’s most powerful hydrogen-fuelled rocket, the ULA’s Delta IV Heavy rocket uses three Aerojet Rocketdyne RS-68A engines; one on each of its three common booster cores to launch the nation’s most critical spacecraft into orbit.

The three RS-68A engines combine to generate more than two million pounds of thrust for the Delta IV Heavy.

Eileen Drake, Aerojet Rocketdyne CEO and President, said, “The throttleable RS-68A engine has been the centrepiece of the Delta IV Heavy rocket for more than 15 years. We are very proud of the 65 engines flown to date and their flawless performance record.”

“This engine was developed entirely with company funds to be a very cost competitive and extremely reliable booster engine.”

The upgraded RS-68A, which generates 705,000 pounds of thrust at sea level, completed its first test firing in September 2008, was certified in April 2011 and made its inaugural flight in June 2012.

According to a statement, the Delta IV Heavy has four launches remaining.