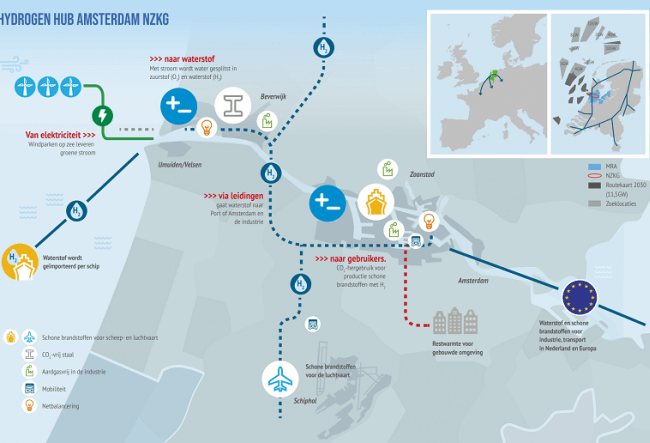 Hydrogen hub in Amsterdam presented at the World Hydrogen Congress

The Dutch Minister of Economic Affairs Alderman Victor Everhardt has presented an Amsterdam hydrogen hub during the World Hydrogen Congress on Wednesday (Oct 6).

The project, Amsterdam NZKG, aims to accelerate the transition to hydrogen by turning the Amsterdam Metropolitan Area and North Sea Canal Area into an international hydrogen hub in the coming decades.

In doing so, hydrogen could be both exported and imported from the region as it looks to provide an infrastructure to support the hydrogen value chain across Europe.

The plans for the hydrogen hub have been outlined in a position paper referencing the unique characteristics of the region that could give hydrogen an excellent starting point to develop sustainable value chains.

One unique factor is that the Port of Amsterdam is one of the largest fuel ports in the world and would have the necessary capacity to import and export hydrogen and distribute it through its embedded gas and fuel infrastructure.

You can find the position paper here.