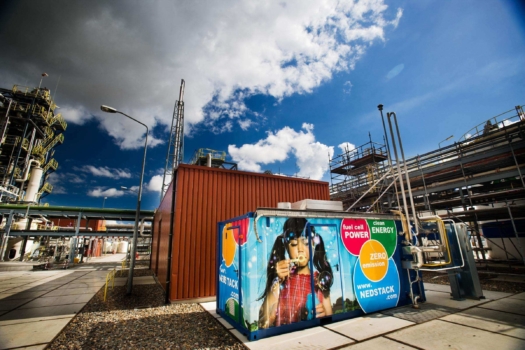 Fuel cell manufacturer Nedstack is working with the shipping sector to develop a hydrogen-electric drivetrain for marine applications.

The 135-meter-long ship will transport salt from the Nouryon (formerly AkzoNobel) salt factory in Delfzijl to the Botlek in Rotterdam.

“With the Antonie, we want to show that it is technically and economically feasible to equip an inland vessel with a hydrogen-electric drivetrain. At the same time, we want to demonstrate a new method for bunkering and storing hydrogen,” explained Kees de Vries, project leader of the WEVA project.

“A second and third ship are already under development.”

Nedstack has made significant progress in recent years in making its PEM fuel cells suitable for marine applications in close collaboration with Koedood.

A complete operational test setup has been developed at MARIN in Wageningen in a consortium with MARIN, Damen Shipyards Group, Future Proof Shipping, Marine Service Noord and Holland Ship Electric.

This also happened with the support of RVO, in the project FELMAR – an acronym of First ELement MARine.

This places high demands on reliability and reliability, and is accompanied by a design that facilitates easy inspection and service.

“These are precisely the basic principles that make the cells suitable for use in inland vessels, especially in the larger ships that have many operating hours,” Van de Pas said.

Naturally, the combination of fuel cells with an electric drivetrain for inland shipping has special requirements. For example, the system has been tested in a ‘hexapod’ setup that simulates the movements of a ship that sways on the waves.

It is important, for example, that the cooling water flow of the fuel cell is maintained. Incidentally, this applies especially in more extreme circumstances such as in seaports and in short sea applications (coastal shipping).

Important in the ‘marinization’ of the fuel cell is also that the propulsion system meets the power requirements of the ship in accordance with the maritime class rules. Upstream, downstream and when manoeuvring and mooring.

“The skipper should not notice the difference with a diesel engine in this respect,” said Van de Pas.

This resulted in a configuration in which the fuel cell is combined with a battery to provide peak powers.

The FELMAR test configuration includes a 40 kW fuel cell with parameters such as electrical voltage and hydrogen pressure of the order of magnitude relevant for marine application. The latest tests will soon take place under practical conditions in MARIN’s new zero-emission lab.

Nedstack is now preparing systems of 200 and 500 kW for marine applications. The company has recently entered into strategic partnerships with key players such as Koedood, General Electric and Damen Schelde Marine services.

Concluding, Van de Pas said he not only sees opportunities for hydrogen vessels in inland shipping, but also in sectors such as coastal management, dredging, port companies and ferry services.

“These are sectors where the government is a very important client. And you can expect that as a ‘problem owner’ it is very important to stimulate zero-emission solutions. I expect that there will therefore be a lot of interest in hydrogen,” he said.

The hydrogen society: 10 signs it is happening