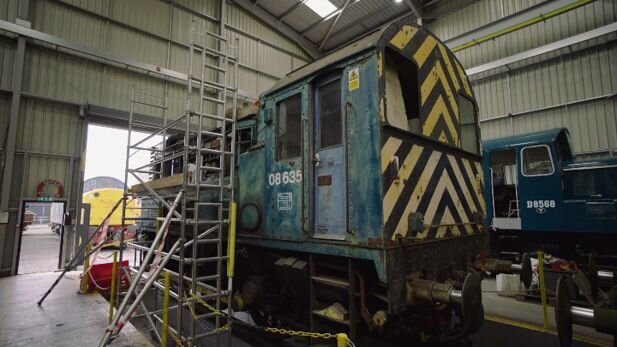 HydroShunter: Diesel locomotive set to be converted to hydrogen power

The UK is set for what could be its first ever conversion of a diesel locomotive to run on hydrogen power which will then be put into operation by the Severn Valley Railway.

Severn Valley Railway today (April 23rd) said it has teamed up with the University of Birmingham and Vanguard Sustainable Transport Solutions to work on this groundbreaking scheme, dubbed HydroShunter, in Kidderminster, UK.

The Class 08 shunter no 08635 train will have a hydrogen battery hybrid traction system implemented into it which is made up of hydrogen cylinders, a hydrogen fuel cell stack and a hybrid battery.

The cylinders will store hydrogen as a pressurised gas, which will be fed to the fuel cell stack via a regulator.

In the fuel cell stack, hydrogen will be combined with oxygen from the air, to produce electricity to power the locomotive whilst the battery will store energy to provide additional power for when it’s needed.

The equipment will be mounted on a subframe, fitted to the existing engine mountings. It will supply the existing traction motors of the Class 08, which will keep its existing controls.

Vanguard’s engineers are developing the power pack design at the University of Birmingham and will install this into the Class 08 in the coming months.

Development at the heritage railway’s diesel depot, in Kidderminster, is already underway with a team currently in the process of removing the donated locomotive’s existing diesel engine and generators as well as overhauling other components for the new hydrogen power system.

Testing of the hydrogen-power shunter locomotive will take place at the Severn Valley Railway later this year with the technology predicted to have a global significance with the teams working towards translating this to heavy-haul applications.

“Following the success of our HydroFLEX project with Porterbrook that delivered the UK’s first mainline approved hydrogen train, we are thrilled to be working with the Severn Valley Railway and Vanguard to roll out the Harrier HydroShunter.

“This is another fantastic project where BCRRE has partnered with a leading heritage railway and an innovative local start-up business to pioneer our research in a real world industrial application.”