Hyundai is not putting the brakes on hydrogen

Amid rumours that vehicle manufacturer Hyundai is stopping its hydrogen fuel cell developments, the firm has confirmed that is most definitely not the case.

Developer of one of the most renowned fuel cell electric vehicles (FCEVs), the Nexo, Hyundai has long been a player in the hydrogen space.

That being said, according to autoevolution, rumours had started to emerge stating that the company was slowing down its hydrogen vehicles projects amid slow sales.

However, this is not the case – in fact, it’s quite the opposite.

Confirming its hydrogen ambitions to H2 View today (Jan 5), Hyundai said, “Hyundai Motor Group is in the process of developing a third-generation fuel cell system. Back in November, we decided to expand our hydrogen fuel cell organisation to enhance our research and development capabilities.

“The group’s hydrogen fuel cell organisation consists of the two centres: The Hydrogen and Fuel Cell Development Centre is in charge of technology development, and the Hydrogen and Fuel Cell Business Centre will further strengthen business strategies and operations. This change will allow us to better focus on research and development by concentrating our resources and maximising our capabilities.

“With the organisational expansion and reformation, Hyundai Motor Group is in the process of fine-tuning the direction and timing of R&D regarding hydrogen fuel cells. But, changes in development timing does not mean we are stopping the development of new vehicles.” 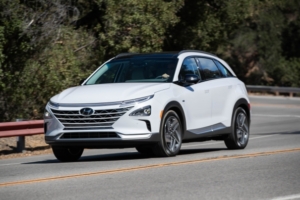 Offering the only hydrogen-powered SUV in the US market, Hyundai Motor Company prides itself in its commitment to clean energy and fuel cell stack technology.Hyundai started its commitment to hydrogen around 21 years ago, right at the turn of the century, and since that point the vehicle manufacturer has not looked back.

The NEXO, Hyundai’s latest fuel cell vehicle offering, was launched in 2019 and has since taken the Californian market by storm, with approximately 400-500 units running in the sunshine state right now.