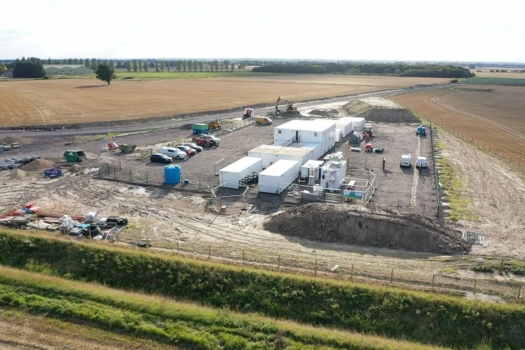 As part of what is thought to be a world first for the construction industry, Siemens Energy has installed a zero emission hydrogen fuel cell to provide off grid power to National Grid’s Viking Link construction site.

Installed last month, the hydrogen fuelled critical power system will provide 250kVA of standard three phase, 400V electrical power and up to 80kW of heating to around 20 cabins, a drying room and six electric car vehicle charging points located across the construction village.

Off grid power is critical at the site as it will not have any grid connection for six to eight months.

The fuel cell system, piloted by Siemens at the Goodwood Festival of Speed in 2019, was further developed by Siemens Energy’s partner, GeoPura, and uses the waste heat, which is usually lost from the fuel cell’s cooling system.

Steve Scrimshaw, Vice-President of Siemens Energy UK&I, said, “This is a great project and I’m delighted that we as Siemens Energy, with our partner GeoPura, have been able to walk the talk on how to build a hydrogen economy.”

“In order to get the hydrogen economy moving, we need to create a market and it’s small projects, such like this, which will increase the demand for green hydrogen, proving a pipeline of work for the supply chain.”

Initially, the hydrogen supplied for the fuel cell system will come from conventional hydrogen sources but will then move to green hydrogen once a suitable supply has been confirmed. By using green hydrogen, a tonne of carbon dioxide will be saved each week.

The fuel cell system is based on a single 20ft shipping container which houses all the equipment needed to convert the hydrogen into electricity and heat. Around 300 meters of reusable piping has been installed at the site to distribute hot water from the fuel cell.

Energy Minister Kwasi Kwarteng, said, “Hydrogen has a key role to play in the UK’s journey to net zero carbon emissions and I am delighted to see this innovative off-grid power source being installed at Viking Link.”

“It is step such as this which will be vital in enabling a hydrogen economy to flourish in the UK as we build back better with new low carbon jobs.”