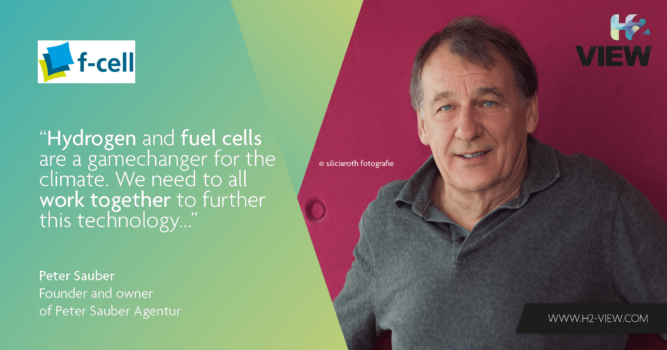 Inside f-cell, from its origins to future plans

Stuttgart, Germany: the home of automakers Daimler and Porsche, auto components supplier Bosch and one of the oldest international hydrogen and fuel cell trade events, f-cell. For the past 20 years, hydrogen and fuel cell experts from all over the world have gathered in Stuttgart for the two-day event, which provides an extensive overview for relevant international markets and industries, as well as technological advancements.

And 2020 was like no other year for f-cell; even a global pandemic didn’t stop Peter Sauber Agentur from putting on a good show. Despite these strange and uncertain times, more than 700 attended f-cell either in person or tuned in online as Peter Sauber Agentur adapted the event to fit the ongoing Covid-19 crisis and held it in hybrid style. Attendees aside, f-cell hosted 59 speakers, 52 exhibitors, four plenaries, 12 sessions, 16 f-cell Pitches, an f-cell award ceremony and a 24-hour Hydrogen Challenge with 17 teams! A record year, I think it’s fair to say, and very fitting given f-cell celebrated its 20th anniversary in 2020.

And we haven’t even mentioned f-cell+HFC Vancouver yet, which Peter Sauber Agentur also held in September, in partnership with the Canadian Hydrogen and Fuel Cell Association (CHFCA). After two postponements, it was unfortunately not possible to hold f-cell+HFC 2020 on the ground in Vancouver this year, so the team transformed it into a purely digital two-day conference and trade fair. More than 350 people virtually attended from 20 countries to watch 92 speakers across four plenaries, 11 sessions, three workshops and a topic table.

Rested and recuperated from hosting two mammoth events in the space of just weeks, Peter Sauber, founder and owner of Peter Sauber Agentur, attributes the success of f-cell to the community: “When we first started people said, ‘There are lots of events, it won’t be a success.’ But every year we came back and did it again, and with the help of good partners, the event has grown year-by-year.”