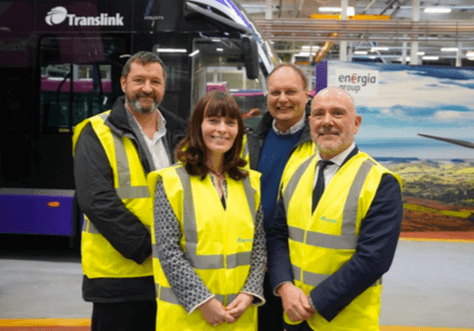 Belfast is set to become the first city in Ireland to have double-decker hydrogen-powered buses in the first major step to decarbonise Northern Ireland’s public transport to zero emissions by 2040.

A consortium comprising Northern Ireland’s public transport operator Translink, Energia Group and Wrightbus have been awarded £1.9m of grant funding from the Hydrogen for Transport Programme (HTP) – a fund supporting the development and deployment of zero emission road transport established by the Office for Low Emission Vehicles (OLEV).

The pilot project, Northern Ireland Hydrogen Transport, will also deliver the first ever hydrogen refuelling station of its kind in Ireland.

Wrightbus will build and supply three buses to Translink, which will then refuel at Energia Group’s new hydrogen station in Belfast. Hydrogen supplied to the station will be produced using curtailed electricity from a local wind farm.