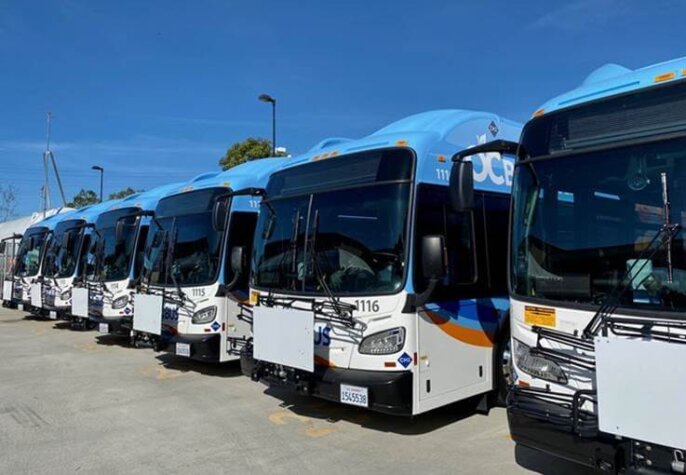 The Hydrogen Strategy for Canada is released. Excitement about hydrogen and fuel cells has never been higher and the Canadian Hydrogen and Fuel Cell Association (CHFCA) is launching the Urban Transit Task Force, a national initiative to market fuel cell electric buses to Canadian transit agencies.

Why? Because they are a great way for fleets to convert to zero emission, as witnessed by the more than 2,000 in service around the world and the many fleets that are making the decision to adopt fuel cell bus in their transition plan to zero emission.

Last year marked the 10-year anniversary of the 2010 Winter Olympics in Vancouver B.C., and it was marked with nostalgic articles about what a fantastic party it was and what a wonderful achievement by Canada, with a record medal hauls, a great atmosphere, great legacy facilities and of course, the medal-winning goal by Sydney Crosby.

What was conspicuously absent is any celebration of the Whistler Fuel Cell Bus Project. What was that, you say? Well, it was an ambitious project to run, for the first time in the world, a bus fleet made up entirely of zero emission hydrogen fuel cell electric buses. And to run them in full revenue service up and down the hills and through the snow of a mountain village. 23 buses built on technology invented and developed in Canada.

And now, with the benefit of 10-years of hindsight, we can look back and celebrate what was a truly remarkable achievement. And don’t get me wrong – it was no cakewalk!  It was a long and challenging demonstration that advanced fuel cell technology immeasurably – and as a result, hydrogen and fuel cells today give the world the chance to achieve net-zero emissions by 2050. In fact, we should be lauding from the rooftops the people and companies involved.

I was talking with Jeff Grant, principal of Zen Consulting, and he was relating how major transit agencies in California: Foothill Transit, AC Transit, Sunline, Orange County, Bay Area Rapid Transit and more, are all incorporating fuel cell electric buses in their transition to fully zero emission fleets. Over the past decade, they have run trials of both fuel cell and battery buses and have come to realize that, while batteries may work for small fleets and some routes, fuel cells help them control their major cost – labour and capital – by providing route flexibility, fast filling, range to allow one-to-one replacement for diesel buses and vastly simpler and less expensive fueling infrastructure at scale.

They should be very grateful to the people involved in the Whistler project.

Going into the Olympics, the Federal and Provincial governments wanted showcase projects. Vancouver is the home of the proton-exchange membrane (PEM) fuel cell, so Ballard Power Systems and champions in BC Transit, a provincial transit agency, lobbied hard for a big demonstration. Ballard had been working on PEM technology for 25 years, with major investor and government support, and the technology was ready to move beyond one or two bus pilot projects to a significant deployment. The governments bit and BC Transit offered up Whistler Village as the test site. “Don’t worry,” I am sure they told the bosses, “it’ll be great!”

Hmmm… I’ve been commercializing technology for over 30 years. It’s never “great”. On the contrary, it is incredibly difficult to do something for the first time.  But it is also one of the most vital and rewarding things you can do. All great companies – and countries – must learn to do it successfully.

Ballard provided the fuel cells, New Flyer of Winnipeg, Manitoba the basic buses (sans power train), Air Liquide and HTEC Hydrogen and Technology Corporation the hydrogen and fueling station. The incredibly important job of integrating the fuel cells with the bus, drive motor, fueling tanks and controls fell to a California company with experience in the area. And of course, BC Transit had overall responsibility to keep them running and to service their customers.

Over the next four years, the buses were built, commissioned and operated by regular BC Transit drivers on normal routes, day in and day out, though summer and winter conditions. I spoke with Erin Cooke, she is with Winnipeg Transit, but at the time, she was with New Flyer and responsible for reviewing the results. Drivers and riders liked them. Fuel cells were shown to work reliably in commercial conditions and hydrogen to be a viable fuel for heavy duty transportation. Those buses accumulated over 3 million kilometres on the road. An amazing feat!

And so, four years and $94 million later, the project was halted. The buses were sold and there has not been another fuel cell bus project in Canada since.

Wait, what?! This sounds like the Avro Arrow story. Is this another case of a leading Canadian technology thrown away just as it was about to take off?

No! Not this time. This time the technology, and Canada’s role in it, has grown stronger.  Due to the amazing fortitude and hard work of the companies involved, that investment is about to pay off!

Yes, the Whistler project was stopped. The project had encountered several unexpected costs for issues that arose during demonstration. Everyone involved had learned what they could from the project. And faced with a $25 million bill to keep the buses running for another four years during a time of economic constraint, no one: not the agency, the Province, the Federal government or industry, felt there was enough new information to be learned to justify the cost. BC Transit said, “Sorry! We made a first down, but the technology is not quite ready. It is time to let someone else carry the ball for fuel cell buses.”

So, what were the issues?  One could say they were not unusual for a first of project – and precisely the reason why the government had stepped in to help de-risk in the first place.  But full disclosure, let’s not get too starry-eyed…

The first thing that happened was the California system integrator went broke. Ouch! Ballard had supplied the fuel cells and backed those. New Flyer the bus frame and shell. But who would look after all the rest? To their everlasting credit, BC Transit stepped up and took on the task of keeping them running.  But normally, transit agencies can rely on the bus supplier to do that. Not surprisingly, maintenance costs rose. (Ka-ching!)

Then it turned out the Californian system operator neglected to design for Canadian winters – the buses had to be redesigned and rebuilt to provide enough heat so passengers didn’t freeze. Oops. That and other hiccups meant the buses weren’t as efficient as planned. (Ka-ching again!)

Then, operating costs were higher than planned. The only “green” hydrogen available at the time had to be trucked in from Quebec. An amazing logistics accomplishment by Air Liquide to supply reliably all year long and by HTEC to keep the fueling system humming, but it drove up the costs. Evaporation and cooldown losses exacerbated the situation. And unfortunately, plans to build a vitally needed hydrogen plant in B.C. died when the program was cancelled. (And we’re still waiting!)

These are typical teething problems that have since been solved and didn’t negate the fundamental success. But who could blame a transit company charged with running a cost-efficient and reliable fleet for saying, “Enough!”

What is somewhat disappointing is that as a country it has taken us ten years to have the vision, the belief in ourselves to take what we had learned and move on to another, better demonstration. Look at how many times Elon Musk’s rocket crashed. He did not give up. He and his team celebrated the failures, learned from them and now service the Space Station.

The future of hydrogen-powered buses is here

Fortunately, we now have that chance. Because unlike the Avro Arrow, the Whistler buses were not cut up and buried along with their groundbreaking technology. They were parked, but the technology behind them was further refined, developed and perfected through trials and demonstrations in Europe, the USA, China, Japan and many other countries.  And now, a dozen European bus companies offer commercial fuel cell buses for sale. Ballard went on to supply fuel cells to most of them as well as other companies and is now the leading PEM fuel cell company in the world. New Flyer sells fuel cell buses to California and other states. And many engineers and scientists who cut their teeth on the Whistler project now run companies in Vancouver, such as Loop, Illuming, Overdrive and Zen, which offer world-leading technology to help companies around the world integrate fuel cell technology into buses, trucks, trains and other heavy equipment.

As a result, we have durable, cost-effective and efficient commercial fuel cell products coming to market that offer the means to decarbonise heavy duty transportation. Canadian companies play a big part in it and Canada has now the opportunity to deploy this technology too.

All because of the Whistler Bus Project and the smart, hard-working and dedicated people who made it happen.

No! To heck with nostalgia.  Contact CHFCA’s Urban Transit Committee, check our website, talk to our members, check out the latest fuel cell buses, call your transit agency or municipality…

And let’s do it again!

Mark Kirby is the President and CEO of the Canadian Hydrogen and Fuel Cell Association (CHFCA).