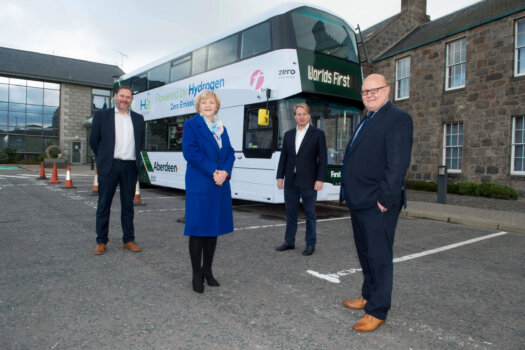 When a fleet of hydrogen-powered double decker buses hit the streets of Aberdeen, Scotland last week, it was a world first.

Operated by First Bus in a project led by Aberdeen City Council, the buses have been manufactured by Northern Ireland-based Wrightbus and feature a bespoke system from Luxfer Gas Cylinders to power them.

The system for the 15-strong fleet features Luxfer’s G-Stor™ H2 hydrogen cylinders. Around 150,000 of these types of cylinders are already in service worldwide, equipping over 10,000 CNG buses and an increasing number of hydrogen buses plus approximately 4,500 refuse vehicles.

Mark Lawday, a Director at Luxfer Gas Cylinders, explained, “The hydrogen economy is now taking off, but it’s an area we’ve worked in for three decades.”