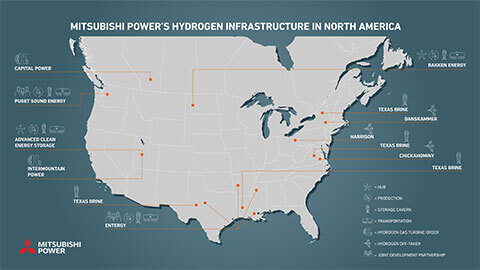 Mitsubishi Power is continuing its expansion of hydrogen infrastructure in North America with Citi set to remain as its strategic financial advisor.

With the interest surrounding hydrogen in North America, Mitsubishi Power has progressed several projects that enhances the required infrastructure to accelerate the adoption of hydrogen in the region.

One current project Mitsubishi is a part of is the Advanced Clean Energy Storage that is looking to create a green hydrogen hub in Delta, Utah that will eventually provide pipeline connectivity throughout the Western Interconnect of North America.

The project will produce renewable hydrogen, store it in underground salt dome caverns, and dispatch it as a clean fuel for power generation, transportation, and industrial applications.

Mitsubishi is also involved with developing a hydrogen hub in North Dakota that comprises of facilities that produce, store, transport and consume blue hydrogen.

This will also be connected via pipeline to other hydrogen hubs being developed throughout North America.

The agreement with Citi will see Mitsubishi Power seek guidance as it extends its joint development projects whilst also securing hydrogen off-takers.

“We look forward to helping them model the trajectory to clean hydrogen.

“We will leverage our expertise in assisting clients in traditionally carbon-intensive industries to help Mitsubishi Power explore their options to attract and deploy capital from investment partners.”