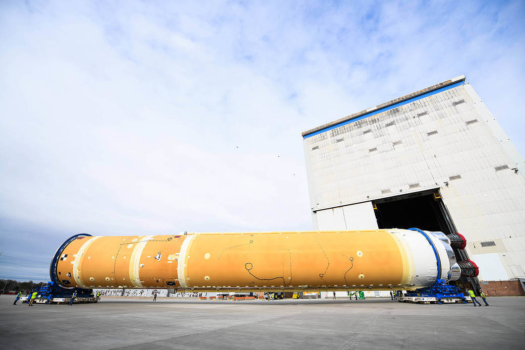 This is the section of NASA’s Space Launch System (SLS) that will hold 733,000 gallons of liquid hydrogen and liquid oxygen.

It’s also the first completed core stage for the behemoth booster designed to send astronauts on expeditions into deep space – and it’s on the move.

Standing at 212-foot tall, it is being shipped via NASA’s Pegasus barge from the agency’s Michoud Assembly Facility in New Orleans to NASA’s Stennis Space Center near Bay St.Louis, Mississippi for testing.

Once at Stennis, the rocket stage will be loaded into the B-2 Test Stand for the core stage Green Run test series.

The comprehensive test campaign will progressively bring the entire core stage, including its avionics and engines, to life for the first time to verify the stage is fit for flight ahead of the launch of Artemis I.

Just as during an actual launch, propellant will flow through the rocket’s two propellant tanks, the avionics and flight computers will operate all the systems and all four RS-25 engines will fire simultaneously.

NASA is working to land the first woman and next man on the Moon by 2024. SLS is part of NASA’s backbone for deep space exporation, along with Orion and the Gateway in orbit around the Moon.

SLS will be the most powerful rocket in the world and will send astronauts in the Orion spacecraft farther into space than ever before.