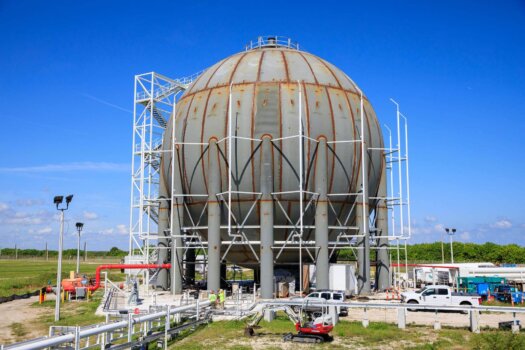 The signature fuel of the American space programme: NASA’s influential role in the liquid hydrogen ecosystem

As NASA looks once again to putting astronauts back on the surface of the moon, with the upcoming Artemis missions, liquid hydrogen will yet again play a pivotal role in getting to Earth’s neighbour.

Despite fuel cells not being used onboard the Orion spacecraft, with NASA alternatively employing solar panels, liquid hydrogen will be utilised to fuel the spacecraft. But with NASA’s space missions beginning to ramp up again, how will NASA store the required liquid hydrogen for future missions?

The answer to this is a brand-new liquid hydrogen sphere (pictured above) being developed by NASA at Kennedy Space Center, which will be used to store fuel for future space missions including Artemis. H2 View found out more about this in part two of our interview with Adam Swanger, Principal Investigator at the Cryogenics Test Laboratory, NASA’s Kennedy Space Center, and Mark Berg, NASA Engineer.

“The new storage tank we are building will help us with the future iterations of Artemis. The existing tanks that we have right now are fine for Artemis one, but we’ll be using a larger upper stage for future missions, so we’ll need some more hydrogen,” Berg told H2 View.